An interesting quote came up during an episode of NCIS: Los Angeles awhile back. The quote was from Mao Zedong’s Little Red Book and states, “Political power grows out of the barrel of a gun.”

I believe, my friends, the leftists have been reading their copies of Mao’s book. So long as the American populace remains armed, leftists’ track-record-proven desire to abuse political power will continue to be limited. The shooting in Florida simply gives them another opportunity to advance their political agenda.

Disarming the populace is the course all totalitarian regimes have followed since the beginning of modern times. The government takes away their guns, then does whatever it wants to them, up to and including genocide. Point of fact: every genocide or government-sanctioned mass murder in modern history has been committed against an unarmed populace — without exception! 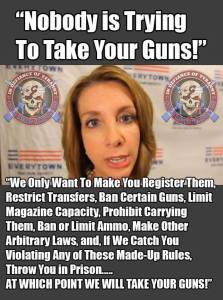 So who do you go after as your next step towards disarming your political opponents? Attempt to discredit the single-most-visible organization championing the cause of gun rights, the NRA. How? By blaming them for massacres committed by no one who has ever belonged to that group.

The left has this schizoid concept of police where they vilify officers as oppressive racist pigs on one hand and then in the next breath state that the police are the only ones who can be trusted with guns. Go figure!

While I am a big supporter of law enforcement and go out of my way to show appreciation to every officer I encounter, the simple truth of the matter is that a small minority of officers are simply unworthy of the trust given them. This was demonstrated by the between 1 and 4 (depending upon the accuracy of the news reports) sheriff’s deputies who parked themselves out of harm’s way outside that Florida school, rather than running inside towards the sound of the gun.

In all fairness, while we may imagine and posture ourselves that we are willing to risk our lives in mortal combat to save the lives of others, the only way we will truly know the answer to that burning question is in the crucible of actual combat. It is difficult — bordering on impossible — to weed out posers from warriors apart from it. No amount of training will take the place of actually staring death in the face and spitting in it by fighting back, though training can certainly give us the necessary confidence in our ability whenever we do.

While I have mentally prepared and trained quite a bit over the years, the truth of the matter is that I cannot and will not know how I will respond to a deadly threat because I’ve never been faced with one. My fervent prayer is that, if and when the time comes, I will fight, not flee or freeze. 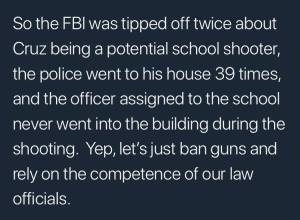 Are we truly willing to continue rolling that pair of dice, that the officers who already can only show up 5-15 minutes after being called out to our children’s school for such an incident and then upon arrival, may or may not engage the perpetrator(s) in armed conflict to stop the slaughter?

On top of this epic FAIL, there was as series of others committed by all the applicable government agencies in preventing this tragedy. The FBI failed to follow up on reports that the perpetrator had threatened lives publically on YouTube. The local agencies failed to have the kid committed for psychiatric evaluation despite many, many (30+) reports of the kid’s mental instability.

I have to ask: what kind of additional gun control laws would have prevented this kind of egregious incompetence? It appears that our FBI is far more interested in spying on and sabotaging Obama’s political opponents than it is in enforcing the laws already on the books designed to nip such tragedies in the bud. 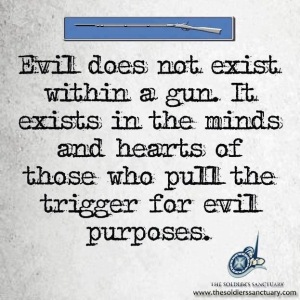 And, if my own sad experience with school authorities is any guide, there were legions of bad choices made by various principles, deans, coaches, and teachers which will most likely go undiagnosed and uncorrected. The bright ray of light in that morass was the heroic actions of the teachers who gave their lives protecting students. They should receive the highest of honors because they had the greatest love, laying their lives down for the sheep.

As for guns and their owners, I can guarantee you that no weapon in recorded history has suddenly become self-aware and attacked someone. A weapon, like any other tool, has to be wielded by a human being. My owning one or more guns, knives, and other weapons has never given me the desire to suddenly go out and start killing people. My martial arts training has never created a desire in me to go “try it out” on someone.

Why? Because my heart and mind are ruled by the King of Kings and Lord of Lords, the Person of Jesus Christ.

Is that rule absolute in its effect? Neither nearly as much as my heart desires nor my mind imagines. But my worldview is in fact dominated by biblical principles/philosophy, specifically, I do not consider murdering anyone who crosses me because: 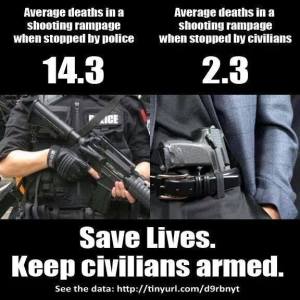 And no matter how hard people try, you cannot legislate away someone’s evil heart, all you can do is defend against it when it chooses to act out.

So I say this:

Finally, stop blaming those who have nothing to do with such atrocities!

Some further light reading concerning the topic of self-defense.

1 thought on “On School Shootings & Other Massacres”