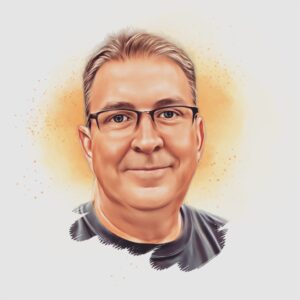 My name is John Foster.

I am a Christian.

After that I am a husband, a dad, a son, a brother, a friend, an artist, a citizen, and a fellow human.

I have been on earth since 1965; you can do the math. I was born in a small suburb of Wichita, Kansas to a middle-class hard-working family of six, mom and dad who never divorced, always went to the Baptist church, never drank in my presence, smoked Camels and Kools, loved hard and spanked hard, and were my biggest fans. Third-born of four children, I was at the same time a middle-child and the older-child, my older siblings were 9 and 7 years older, my younger brother just 14 months my junior.

Looking back, growing up in the 70s didn’t seem overly bad or cool or hard or easy, it was just normal. Playing outside until the street lights came on, swimming in the summer and sledding in the winter. If there were any major tragedies in our home I was shielded or unaware. Our small town was Midwestern white — other than the men on the trash truck, I had no knowledge of or interaction with a person of color until 7th grade. My preferred mode of transportation was my bicycle, and dad was always building some sort of race car, dirt-track stock cars specifically. I grew up in the garage, holding the light for dad, going to races on Saturday night, church on Sunday morning. I consider it a nice childhood, though my greatest battles would come at 14 years of age.

The summer before I went to high school, 1981, Dad had open-heart surgery, my grandfather passed away, and I was diagnosed with leukemia. Life changed dramatically. Upon diagnosis I spent two full weeks in the hospital, I was six-foot tall and 125 pounds — I looked like a skeleton. The long course of treatment would last three years, with me in an out of the hospital. I missed 60 days of school my freshman year of high school, and nearly died from the side-effects of the chemicals driving out the cancer that was killing me.

As you would expect, numerous things happened in those pivotal three years that helped form me into the person I am today. During this time, when I was feeling moderately healthy I went to church with the family, but I was later told by my youth pastor that many of my peers did not want to get to know me too well in case I died. (A human response, I hold nothing against them) I didn’t die, obviously, but I did spend a lot of time alone. I never felt God had smitten me or inflicted me, this was just a bad thing that happened and God was carrying me through it. But all around me there was still the un-illuminated notion of “we hope you get better, God’s will be done,” meaning that if I did die that was God’s will and plan.

Since my cancer treatment was chemotherapy, I ate a bunch of pills and had loads of injections. I was honored to be one of the oldest patients my pediatric oncologist had, and when new drugs were used, I was able to provide feedback his younger patients (some as young as a year old) could not provide. My spiritual eyes were beginning to open at 17 years old, and as I gained in strength, I was also gaining in spiritual understanding.

I was going to live and not die, and that was God’s plan for my life!

I began to say in my heart, “God healed me, and God will keep me healed.” At the end of my three-years of chemo therapy treatment, I was set to enter a “tapering-down” regimen to come off the remaining drugs that I had been taking. I told my mother what I had come to believe, and told her that if God healed me, and God will keep me healed, there is no reason to take one more pill; that is just what we did. Dr. Rosen was not too pleased about it, but said he could not make me do it, so mom and I thanked him, shook his hand, and left.

So, maybe I have unique experiences which set me on a path of spiritual enlightenment. I don’t know, but one of the few families who really took me in (even though I might die and cause terrible emotional pain) and invested in my life was my Sunday School teacher when I graduated out of the 12th grade. Bob C. was responsible for my spiritual path in the third chapter of my life. He had a radical friend who had been kicked out of a couple Baptist churches for such out-of-the-box concepts as believing in demonic activity, healing, tongues, presence-of-God-worship and other then-foreign notions. Bob started introducing the literal, current-day applications of the Word of God to me and others, and my spiritual eyes were opened even further.

I ended up leaving the Baptist church with Bob and about 25 others, much to my mom’s disappointment. I had been a member there 21 years.

At 22 years old I became a husband, at 23 I became a father. I was not very good at either job for the first five years or so, although my wife Stacey and my two children are my most treasured gifts on this earth.

Since 1984, I can only remember “sitting in the pew” for a total of five months. Every other month since then, I have been in some form of Christian ministry, paid or unpaid. I love the local church, even with all its flaws.

In 1997 I moved from Wichita, Kansas to the “promised land” of Tulsa, Oklahoma and worked as a graphic artist for an international missions organization.

In 2000, with my wife and two small children, I served on the mission field in the Northern European nation of Estonia for three years. We helped launch a local church there and invest into numerous lives.

In 2011 my wife and I moved abroad again, aligning our lives to do a couple years of missions work in the Middle-Eastern nation of Azerbaijan, although the political climate limited our stay there to 90 days — we could not secure a long-term visa. During that era of “the Arab Spring,” we saw dozens of fine Christian workers lose their visa and have to depart the country. My ninety days in this fascinating country are chronicled here.

I have been married since 1987 to the love of my life, the most courageous, fearless, world-loving, world-traveling missions woman I know. Stacey is my muse and constant companion.

I have always been an artist; when my mother passed away we found stacks of my grade-school-era drawings, the blue-ribbon safety poster from first grade, countless scraps and faded pages of doodles, colorings, and design. This was always a sense of pride for my mom and dad, and eventually the foundations of a life-long career in commercial art. I started in the sign industry in 1984 and have painted and pinstriped ever since. I’ve also worked behind a computer as a graphic artist and designer for more than 12 years. It has been a wonderful career!

I love aviation. I grew up in Wichita, Kansas, the self-proclaimed “Air Capital of the World,” home of Cessna, Boeing, Beechcraft, Lear Jet. At one time more than 30% of the city worked in aviation. I have painted on dozens of aircraft, I worked in aircraft for eight years, and am (still) working on attaining a pilots license.

I love motorcycles. I love boats. I love woodworking and construction. Stacey and I have rehabbed six houses, some a little, a couple to a major extent.

As I get older, I am less interested in what a person knows. Show me how you love. Show me how humble you are. Show me how kind you can be, these are the things that interest me now. Let me work with you, let me worship beside you — those will tell me far more of your character than your accomplishments. I fall back to the simple yet profound elements of I Corinthians 13 and Galatians 5:22-23. Love, peace, joy, patience, kindness, goodness, faithfulness, tenderness, self control, compassion, restraint, honor, trust and trustworthiness, quiet strength, these are where maturity is displayed.

Also with age, I find I want to work smarter. I am a bit of a fan of process refinement, and an analysis geek. Most people would rather do anything besides be in a meeting; I love meetings where folks desire to review actions and look for improvement. As an artist I am always making a sketch before the execution of the design is launched, and I love being in teams who are thinking of the end before the beginning. I have seen enough “fire, ready, aim” to last me the rest of my life, so if I can be part of a planning or discovery group, I like it!

Of late I have become less nationalistic, and less capitalistic, as I see around me the amazing blessing of God and the tremendous need of humankind. 1 John 3:17 burns in my heart:

But whoever has this world’s goods, and sees his brother in need, and shuts up his heart from him, how does the love of God abide in him?

I see people with abundance doing little or nothing to help those in genuine need all around them, yet praying for God to open a door of ministry. The blessing of God exists so we can be a blessing to others, not stack it up and look down at others. This is just my opinion, my assignment — I will never be the one to point fingers to say “you should do such and such…”

Let kindness and compassion be your guide.

There is so much more I could say, but I’ll close with this: