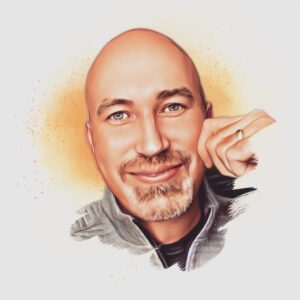 Some of my earliest memories are at the beach. Sand and surf, salty air, and warm sun. I think the Lord started revealing Himself to me on the shorelines and in the waves.

Over the last four decades, He has shown Himself to be as powerful and vast as the ocean – and as calm and safe as a bayside harbor. I need both of God’s hands. His strong one and His comforting one.

That’s probably why any day at the beach bodysurfing is my favorite way to spend a day. Lost in something (and Someone) way bigger and stronger than I’ll ever be, but also able to catch the occasional wave.

I was born in Long Beach, California in 1974. I’m an only child and the son of the most amazing mom that’s ever lived.

And yet, overall my childhood was blessed. I lived a lot like Sandy or Bud Ricks from the old TV series Flipper. In the water or having fun or solving mysteries all day, every day.

Between a mom who loved all things Hollywood and our close proximity to the actual town, I also grew up from earliest memory loving the stage and screen. Maybe in the absence of a house full of siblings, I created my own world in my imagination. It worked out just fine.

By the time I was 10, we’d lived in the same town, but managed to inhabit some 7 or 8 different apartments. And then we moved into the one he lived in.

Bob Merrell lived in the upstairs back unit of our apartment building. I’d see him coming and going from work while I played in the common courtyard. He stopped once to fix a radio-controlled car that I’d broken.

The next time I saw him he asked me up to his porch where he had a very expensive telescope. He wanted to show me some of the planets up close. I was all in.

Bob eventually became my stepdad and then my adoptive dad. But he also became a tangible model of Jesus – Jesus with skin, I like to say – at just the right time. He altered the course of my life and my mom’s too.

We moved from Long Beach up to the mountains of Lake Arrowhead, California for my high school years. Traded beach for mountains – and that worked out just fine too.

It turns out God had masterplanned all this. He used my mom to lay a foundation of faith and love. He used my adoptive dad to show me Jesus. And He brought me to my first church family there in Lake Arrowhead. It wasn’t very long after that where He brought me into His family.

God moved through a youth pastor named Eddie Passmore to lead me to Christ. Coupled with a gospel message by Joel Weldon at Hume Lake Christian Camps, I was rescued by Jesus.

The Scripture tells us that it is the kindness of the Lord that leads us to repentance. That’s true. The kindness of the Lord was so evident to me through my mom, my adoptive dad, Eddie, and Joel. Without the theological lingo yet, I was overwhelmed by the love of Jesus and the need for Him to sit in the driver’s seat of my life.

It was like one of those perfect beach days, floating in the warm sea water without a care in the world. I was afloat in the expanse of His love and grace and mercy and truth. I know I’ve not been out of that water since that day – and nor will I ever be.

I almost immediately began to feel the tug toward vocational ministry there in high school. Jesus was a patient guide with me as I wrestled with this calling.

Hollywood career or pastoral ministry? That was my 16-year-old dilemma that stuck with me through most of college.

I finished high school and headed off to the University of California at Santa Barbara, a nice balance of beach and education while being close enough to the entertainment industry. That year I was blessed to begin as a freelance comedy writer for The Tonight Show with Jay Leno (another one of the tangible ‘kindnesses’ of the Lord). That would last me throughout my college years and beyond.

After a year at UCSB, God used a series of health issues to redirect my steps to John Brown University in Siloam Springs, Arkansas. At this phenomenal Christian university, I pursued a lot of Bible courses and earned a degree in English and Broadcasting. I was still straddling the line between vocational ministry and the entertainment industry.

I graduated in 1996 and returned to California. I worked at a church as a junior high pastor in Simi Valley and became a studio guide on the backlot tram tour at Universal Studios Hollywood. Still straddling.

Eventually, the Lord made it clear that my heart really was for ministry — and if anything — He’d like to use some of my creative sides to influence my ministry.

And that’s about when He also brought me to my wife and best friend, Anna. She is smarter, wiser, more godly, and definitely prettier than I’ll ever be. I love her with every fiber of my being. She was friend first and love-of-my-life next.

Early in my ministry life, Anna provided much needed stability and comfort as the heavy ocean waves crashed again.

In June of 2003, my mom and adoptive dad went on vacation to Ireland. The first full day there, my dad had a massive heart attack and we lost him.

During that season, God used Anna to remind me of His great love — and redemptive power to work ALL things for the good of those who love Him.

She was and is to this day THE ultimate example of the Lord’s kindness to me. As are my three children, Braddock, Brody, and Leilani. We’re all happy to swimming in His grace day in, day out!

I spent over a decade in ministry to youth and young adults at churches in Simi Valley, Lake Arrowhead, San Luis Obispo, and Santa Clarita, CA; as well as Chandler and Prescott, Arizona.

In 2012, I joined the Lead Team of Heights Church in Prescott, Arizona as Teaching Pastor. I served there for 9 years and am now serving at Restoration Church in Prescott, a church we’d helped start a few years before. I’m also on the Teaching Team of Connection Pointe Christian Church in Brownsburg, Indiana, making the trip out about dozen times per year to teach there.

It seems I’ve spent the last 25 years on all sorts of stages, teaching and performing in churches, camps, theaters, conference centers, and universities. And even one time at a rollerskating rink. But let’s not talk about that night.

I am a pastor, speaker, event-emcee, voice-actor and bodysurfer. But more than any of that, I am loved by Jesus and I love Him deeply. Out of that overflow, I love people deeply. I think of myself as a bit of an old-school pastor-shepherd. I’m not much of a CEO-type leader. I’m not a real visionary in the modern sense of the term. And I’m less interested in the Church as a place where, but rather a people who.

I believe the Bible is God’s precious Word and that it is without error. I believe Jesus Christ is the way, the truth, and the life. I believe the Holy Spirit is active today in miraculous ways and small ways. I believe God’s people are are empowered by God for the building of His Kingdom.