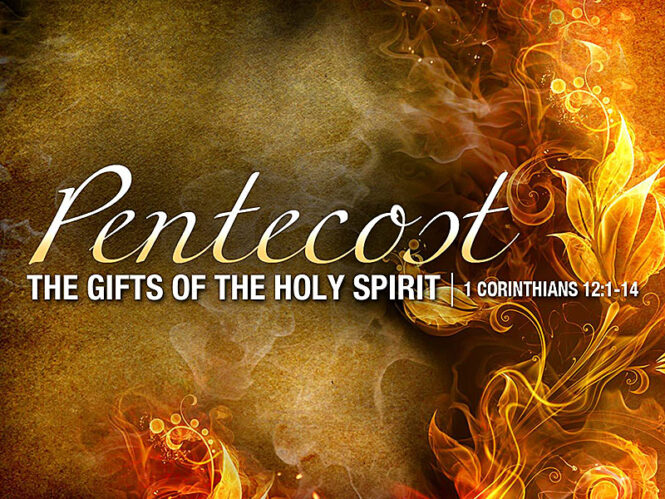 So let’s take a look at the history of the early Church and see what the New Testament has to say about speaking in tongues and whether or not it is the initial evidence of someone being baptized in the Holy Spirit.

There are 6 biblical accounts of people receiving Holy Spirit baptism — aka “being filled with the Spirit” — in the Book of Acts, 3 cases where the Word specifically states that those present spoke in tongues, 2 where that is implied, and one instance where the Bible is totally silent on the issue.

The Day of Pentecost

The first specific account deals with those in the upper room on the Day of Pentecost in the second chapter of Acts:

When the Day of Pentecost had fully come, they were all with one accord in one place. And suddenly there came a sound from heaven, as of a rushing mighty wind, and it filled the whole house where they were sitting. Then there appeared to them divided tongues, as of fire, and one sat upon each of them. And they were all filled with the Holy Spirit and began to speak with other tongues, as the Spirit gave them utterance.

And there were dwelling in Jerusalem Jews, devout men, from every nation under heaven. And when this sound occurred, the multitude came together, and were confused, because everyone heard them speak in his own language.

Then they were all amazed and marveled, saying to one another, ‘Look, are not all these who speak Galileans? And how is it that we hear, each in our own language in which we were born? Parthians and Medes and Elamites, those dwelling in Mesopotamia, Judea and Cappadocia, Pontus and Asia, Phrygia and Pamphylia, Egypt and the parts of Libya adjoining Cyrene, visitors from Rome, both Jews and proselytes, Cretans and Arabs — we hear them speaking in our own tongues the wonderful works of God.’ Acts 2:1-11

Three things to note about this passage:

The Healing of the Crippled Beggar & Its Aftermath

The silent occurrence takes place later in Acts 4 after Peter had been used of God to heal the 40-year-old crippled beggar beside the temple’s Beautiful Gate and leading another roughly 5,000 men to Jesus. After Peter and John were arrested, interrogated, and threatened by the Sanhedrin for proclaiming the resurrection, they returned to the other disciples and they all prayed in unity:

Now, Lord, look on their threats, and grant to Your servants that with all boldness they may speak Your Word, by stretching out Your hand to heal, and that signs and wonders may be done through the name of Your holy Servant Jesus. And when they had prayed, the place where they were assembled together was shaken; and they were all filled with the Holy Spirit, and they spoke the word of God with boldness. Acts 4:29-31

The first implied instance was the Samaritan revival God started at the hands of the deacon Philip after he and others fled the first persecution of Christians as described in Acts 8. After he arrives in Samaria, he begins to preach the Gospel of Jesus with signs and wonders of healing and deliverance following. Simon the Magician sees all the signs and wonders and gets saved and water baptized, so he is now officially born again with Philip discipling him. We’ll take up the narrative at verse 14:

Now when the apostles who were at Jerusalem heard that Samaria had received the Word of God, they sent Peter and John to them, who, when they had come down, prayed for them that they might receive the Holy Spirit, for as yet He had fallen upon none of them. They had only been baptized in the name of the Lord Jesus. Then they laid hands on them, and they received the Holy Spirit.

And when Simon saw that through the laying on of the apostles’ hands the Holy Spirit was given, he offered them money, saying, ‘Give me this power also, that anyone on whom I lay hands may receive the Holy Spirit.’ Acts 8:14-19

So after hearing about the revival in Samaria, Peter and John showed up to see what was going on, laid hands on all the new believers, and they received the Holy Spirit. Now Simon has already seen signs and wonders of healing and deliverance, yet something so spectacular, albeit unrecorded, occurs when these folks are filled with the Spirit. So what’s on the list of miracles described in the Book of Acts that is missing from this scenario? Tongues!

But this is strictly my own personal opinion and you are under no obligation to agree with me on this.

The Conversion of Saul of Tarsus

This is the second implied incident of tongues and the baptism in the Holy Spirit.

After Saul encountered Jesus on the road to Damascus, he was taken to Damascus and he stayed there three days, completely blind. God commanded a disciple named Ananias to go pray for Saul. The account reads:

And Ananias went his way and entered the house; and laying his hands on him he said, ‘Brother Saul, the Lord Jesus, who appeared to you on the road as you came, has sent me that you may receive your sight and be filled with the Holy Spirit.’Acts 9:17

Though this account in Acts specifically states that Ananias was there for Saul to be filled with the Holy Spirit, it says nothing in it about tongues. However, in his letter to the Corinthian church during his discourse on the use of the gifts of the Holy Spirit within the Church, he inserts the following statement:

I thank my God I speak with tongues more than you all 1 Corinthians 14:18

This clearly states that, somewhere along the way, Paul was indeed gifted by the Holy Spirit with the ability to speak in tongues, precisely when we will never know this side of heaven.

The Conversion of Cornelius & His Household

This is the second specific instance where tongues is directly linked to Holy Spirit baptism and is found in Acts 10. I won’t quote the entire story here for lack of space, but will summarize it, hitting the high points.

An Italian centurion (commander of 100 men, roughly equivalent to a modern-day captain in the US Army) in Caesarea named Cornelius was a Jewish proselyte, a man of faith and charity. He had a dream from God to send messengers to fetch the Apostle Peter from Simon the Tanner’s house as a reward for his faithfulness. Cornelius obeyed.

Meanwhile, back at Simon the Tanner’s house, Peter also had a dream from God that He was declaring as clean certain foods that were not kosher according to Jewish law. Because Peter was a bit slow on the uptake at times, this message was repeated 3 times in the dream. 🙂

When Peter awoke, the messengers from Cornelius were at Simon’s door to deliver the message from their master. The Holy Spirit told Peter to accompany them and Peter obeyed, taking some other believers with him, despite the custom that good Jewish boys of that era were forbidden to enter a Gentile’s house.

When Peter arrived at Cornelius’ house, Cornelius tried to worship Peter, but Peter shut that down immediately. As they conversed further, Cornelius related his dream to Peter and Peter started to witness to him about Jesus. As he did so:

While Peter was still speaking these words, the Holy Spirit fell upon all those who heard the Word. And those of the circumcision who believed were astonished, as many as came with Peter, because the gift of the Holy Spirit had been poured out on the Gentiles also. For they heard them speak with tongues and magnify God. Then Peter answered, ‘Can anyone forbid water, that these should not be baptized who have received the Holy Spirit just as we have?’ And he commanded them to be baptized in the name of the Lord. Acts 10:44-48a

This is the third and final specific instance where speaking in tongues is inextricably linked to the baptism in the Holy Spirit.

In this account, during one of Paul’s missionary journey’s through Asia Minor, he runs across a dozen disciples of John the Baptist in the city of Ephesus. Upon meeting them, he asks if they had received the Holy Spirit since they had believed. They replied that they had not even heard of a Holy Spirit. Paul then asked them what kind of baptism they had received and they answered that they had been baptized by John the Baptist into repentance from sin. Paul responded by preaching the Gospel of Jesus to them. They committed their lives to Christ and were water baptized in the name of Jesus afterwards.

And when Paul had laid hands on them, the Holy Spirit came upon them, and they spoke with tongues and prophesied. Acts 19:5-7

Again, we have the baptism of the Holy Spirit occurring as an experience separate from and subsequent to salvation and being evidenced by the recipients speaking in tongues.

From these passages we can safely conclude that, while God certainly has the divine prerogative to baptize people in the Holy Spirit without them speaking in tongues, we have no scriptural evidence such has ever happened — speaking in tongues was indeed the normative experience for those so baptized.