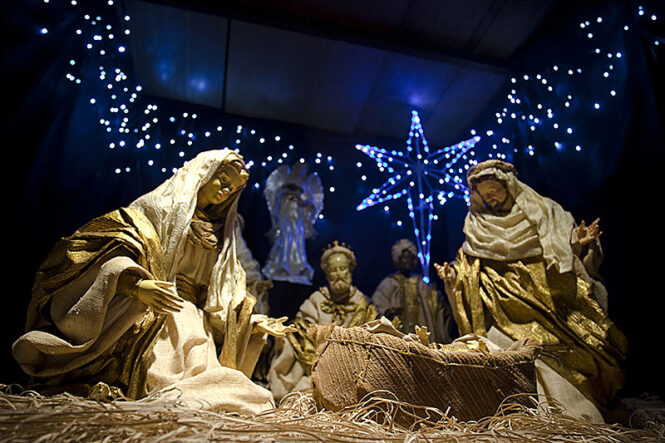 A lot of commentaries tend to come out this time of year dealing with the significance of Christmas.

In mid-to-late December of 2008, I was seeking the Lord as to what church He wanted me to commit to. One Sunday, I dropped in on a congregation near my house with whom I had had a brief contact a couple of years prior. To my dismay, the pastorate had changed hands since my initial interaction with them.

Because the new pastor majored in the minors. He spent his entire sermon describing:

Talk about raining on my Christmas parade! 🙁

Here’s my take-away from that morning:

His sermon was just as much an expression of man’s religion and its dead religious works as the Catholic reasons for misappropriating and legitimizing a pagan holiday in the first place.

Just because a doctrinally corrupt Roman Catholic church erroneously tried to accommodate pagans’ prior belief systems doesn’t mean God cannot redeem such stupidity and turn it to our good and His glory!

And the Body of Christ is supposed to be known for a short list of what it is supposed to do (love God and one another, as well as the lost), rather than what it doesn’t do (extensive lists of sins and other things to avoid, both biblical and man-made).

The True Significance of Christmas

Regardless — and in spite — of such historic factors, we now have an international holiday celebrating the incarnation of God in His Son Jesus Christ. Once a year, despite atheists’ pathological efforts to secularize Christmas to our detriment and businesses dedication to over-commercializing it to their profit, there is one day a year which rubs the nose of a lost and dying world in the fact God reached out to mankind by becoming a man Himself so that He could:

So even though the pedigree of Christmas is inherently flawed, its ultimate premise is not: a celebration of God-in-Sandals!

Houston, the Savior has landed! One small step for God, one giant leap for mankind!

I encourage you to celebrate your Christmas in such a way the Reason for this celebration is glorified regardless of what religious stuffed-shirts may say about it! 🙂

And, again, Merry Christmas to y’all!