Redeemed From the Curse

In Galatians, as Paul is refuting the heresy of Judaizing, he makes a remarkable statement:

‘Christ has redeemed us from the curse of the Law, having become a curse for us (for it is written, “Cursed is everyone who hangs on a tree”)…’ Galatians 3:13

Some people have interpreted this to mean the Law itself was a curse, but that is neither accurate nor scriptural. The Law of Moses was intended to educate a hand-selected-by-the-divine people in the ways of God so their relationships with Him and one another would be an example to the other peoples of the world of what God was really all about. I’ve already discussed what a blood covenant is and the consequences of breaking them in previous articles.

The Blessing & Curse of the Law

All blood covenants had blessings and curses associated with them. Upon the establishment of a covenant, each of the covenant partners would declare what the other would inherit as a member of that covenant as well as the penalties for violating it.

The balance of the chapter contains the Curse of the Law. (Due to space considerations and a desire to make my point quickly here, I will only cite the verses specifically dealing with sickness and disease, leaving the verse numbers in place so you can see where I skipped):

15 But it shall come to pass, if you do not obey the voice of the Lord your God, to observe carefully all His commandments and His statutes which I command you today, that all these curses will come upon you and overtake you:

22 The Lord will strike you with consumption, with fever, with inflammation, with severe burning fever,…

27 The Lord will strike you with the boils of Egypt, with tumors, with the scab, and with the itch, from which you cannot be healed.

35 The Lord will strike you in the knees and on the legs with severe boils which cannot be healed, and from the sole of your foot to the top of your head.

60 Moreover He will bring back on you all the diseases of Egypt, of which you were afraid, and they shall cling to you.

61 Also every sickness and every plague, which is not written in this Book of the Law, will the Lord bring upon you until you are destroyed.

There are those who interpret “the Lord will strike…” to mean that God would remove His hand of protection from them and permit them to be stricken. However, I am not even close to a Hebrew scholar, so I will not weigh in on this one. We’ll accept what it says for now as-is.

So let’s recap: God warns the Israelites that their breaking His covenant of the Law would cause them to be cursed with sicknesses and diseases of every kind, including tuberculosis, cancers, eczema, leprosy, boils, and a host of miscellaneous other general ailments and medical conditions which cannot be so closely categorized. 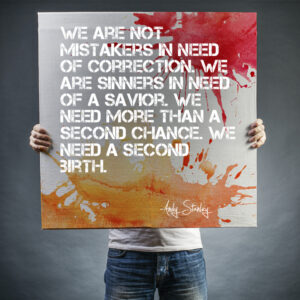 And Jesus became a curse for us by hanging on the cross, taking upon Himself our inability to meet God’s standards through our dead religious works, and transforming those of us who believe into the righteous, the healed, and the delivered — all as a free gift that we could never afford to purchase were it for sale, could never earn through our own efforts were it a wage, and could not deserve through our own feeble attempts at “goodness” were it a reward for holy behavior.

Paul tells us in another letter:

For He (God) made Him who knew no sin (Jesus) to be sin for us, that we might become the righteousness of God in Him. 2 Cornthians 5:21 (parentheticals mine)

There are some who teach that not only did Jesus become sin, but also became sickness itself at the crucifixion. Regardless of whether you want to buy in on that idea or not, Jesus became a curse on that cross so we would be delivered from the Curse of the Law. And as we have seen, the Curse of the Law includes every kind of sickness and disease without exception.