Over the last 39 years I’ve been a believer, one of the topics that I’ve received an abundance of teaching on is divine healing. I’ve even taught on the subject myself occasionally, though not in the depth I’m about to undertake.

So why am I approaching this topic at this particular time?

Well, to be honest I’ve been presented with some significant health challenges over the last week, one of them life-threatening, specifically a cancerous tumor eating away my right kidney.

One of the things I’ve learned about God’s Word is no matter how well you know it, you can always learn more — and the best way to learn more is by teaching it to others.

Unfortunately, divine healing is one of the most divisive doctrines within Christendom (the institutionalized expression of Christianity, aka denominations, church associations, etc.), second only to speaking in tongues in my opinion.

So what’s that all about? Why would some Christians get all bent out of shape over people getting healed by the power of God?

The answer to that question is a complex one, an answer which might require a later article wholly dedicated to exploring it. But in the interim, I’ll give you a simple answer covering much of it: many people erroneously assume that for them to accept and believe God is willing, able, and going to heal those who trust Him for it is to also swallow the whole charismatic experience as a doctrinal bundle, primarily because “gifts of healings” are listed among the gifts of the Spirit in 1 Corinthians 12.

Because many Pentecostals and charismatics present flaky doctrinal teachings about their experience and have demonstrated arrogance toward those who are outside their movement, most non-charismatics are unwilling to explore the Bible’s teachings on the subject of healing, relegating it to “those crazy tongue-talkers” or explaining it away by saying God stopped healing with the demise of the Apostle John (the last of the original 12).

However, though bundles may be a convenient way to buy cable services or software, they make a terrible mechanism for conveying complex biblical truth. So I’m going to break divine healing and health out from the rest of the charismatic experience and we’ll explore whether it can stand on its own doctrinal “legs” apart from the divisive baggage of charismata.

By His Stripes We Were Healed

In this first article, we’ll explore whether Christ indeed purchased our healing during His torture and death at the hands of the Romans and His resurrection from the dead.

First, let’s take a look at the most direct reference to this found in the OT:

Surely He has borne our griefs and carried our sorrows; yet we esteemed Him stricken, smitten by God, and afflicted. But He was wounded for our transgressions, He was bruised for our iniquities; the chastisement for our peace was upon Him, and by His stripes we are healed.Isaiah 53:4-5 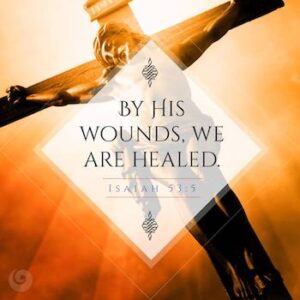 Many other English translations also use the words “griefs” and “sorrows” in verse 4. However, in the original Hebrew language, these words mean a lot more than what we see in those translations. “Griefs” is the Hebrew word choliy which in every other instance it appears in the OT is translated as “sickness” or “disease.” Indeed the word is used 12 times in the OT for “sickness” and another 7 times as “diseases” and only once as “griefs,” here in Isaiah 53.

The word “sorrows” is translated from the Hebrew words bakm mak’ob, which literally translates to “pains” and “sorrows” in English. The concept of pain here carries the idea of both physical pain and mental anguish.

And finally the word “borne” is the Hebrew word nasa, which means “to carry away.” So it is entirely 100% accurate to say:

There are some ministers who would say we cannot categorically claim these words are accurately translated as “diseases” and “pains” in every instance because many Hebrew words change meaning according to linguistic context. In other words, certain words in the original Bible languages can mean different things when used in different ways within that language. However, in this specific case, the Bible itself debunks that idea outright during Matthew’s NT account of Jesus earthly ministry:

When evening had come, they brought to Him many who were demon-possessed. And He cast out the spirits with a word, and healed all who were sick, that it might be fulfilled which was spoken by Isaiah the prophet, saying: ‘He Himself took our infirmities and bore our sicknesses.’ Matthew 8:16-17

And may I point out something that should be immediately obvious: this passage clearly states that Jesus was doing all this during His earthly ministry before His death, burial, and resurrection. So His carrying our sicknesses and pains was a process that was continuously at work during His entire earthly ministry as well as during His torture and execution.

Point of fact: Jesus’ final miracle prior to His arrest was a healing; He reattached the high priest’s slave Malchus’s ear after Peter had whacked it off with a sword!

So where does “healing in the atonement” come into play then? I was just about to tell you!

It comes into play when we examine last phrase of Isaiah 53:5:

…and by His stripes we are healed. 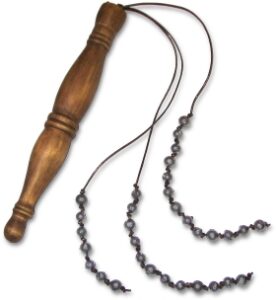 Example of a Roman Flagrum

So what are “stripes,” anyway? The Hebrew word is chabbuwrah which means “bruise, stripe, wound, blow.” And among a host of other indignities and physical assaults, what did Jesus endure during His torture and execution at the hands of the Romans?

A lashing with the Roman flagrum!

The flagrum was an instrument of torture which, when wielded, essentially reduced those whipped with it to human hamburger. It consisted of a wooden handle, attached to which were several leather thongs braided with lead balls, pieces of sharp metal, and slivers of bone. The effect of being whipped with this horrific device was that flesh was literally ripped from the victim.

The process was as follows:

The flagrum was used for both non-capital and capital punishment. Supposedly, 40 lashes of this type were sufficient to kill a man from the blood loss, shock, and pain, so the 39 lashes mentioned by Paul in 2 Corinthians was supposedly the maximum legal sentence short of death.

We today are unsure as to whether scourging was used as a standard precursor to crucifixion or not. Regardless, in the specific case of Jesus, Jesus was indeed flogged prior to His crucifixion (Pontius Pilate, the now-infamous Roman governor who presided over his trial, had intended to flog Jesus without crucifying Him as a non-capital-punishment solution that might satisfy the desires of the mob while preserving the life of an innocent man, but the mob wouldn’t have it).

The movie The Passion Of The Christ has captured this horrific scene with great historical accuracy, though had they completely portrayed the whole of what really happened that day, we would have had a bunch of vomiting movie-goers exiting theaters with Post-Traumatic Stress Disorder from the visuals of such violent trauma. I found a clip of that scene on YouTube and have embedded it here.

If the video does not load, here is a link to it on YouTube.

So why all the emphasis on all this flogging stuff?

Because it was the cost of our healing!

For reasons of His own, the God of the Universe saw fit to have His beloved Son flogged within an inch of His life to purchase our healing before He sent His Son to the Cross to be be crucified for our sins.

And the Apostle Peter wraps it all up in his first epistle, saying:

…Who Himself bore our sins in His own body on the tree, that we, having died to sins, might live for righteousness — by whose stripes you were healed. 1 Peter 2:24

Several well-respected theologians have incorrectly opined the word “healed” here in the Greek means “spiritually healed, made whole” and indeed the word used (iaomai) can mean precisely that. But iaomai also means “to cure or heal physically” and out of the 28 instances of this word’s use in the NT, 26 of them are translated healed.

Furthermore, prior to conversion, our spirits weren’t sick, they were not mostly dead, they were completely dead, dead, DEAD! So when we were born from above, our spirits did not need or receive a spiritual healing — our spirits were raised from the dead and recreated anew in Christ Jesus.

Nothing in any of these Greek words we’ve discussed here even hints at the idea of something or someone being raised from the dead.

So, by applying the scriptural principle “by the mouth of two or three witnesses the matter shall be established,” we can safely conclude Jesus indeed purchased the healing of our physical bodies in the same manner and at the same moment in history He purchased our salvation and freedom from sin: by the torture, death, burial, and resurrection of Jesus Christ.

It’s a package deal and the two are inseparable.

My attitude is this: if God felt the issue of healing us was important enough to Him to submit His Son to the most heinous of tortures to enable us to receive it, who are we to refuse it or explain it away?

October 2021 update: In early 2013, I underwent surgery for the removal of my right kidney along with the tumor. Because they got the tumor out intact before it encroached into my lymphatic system, I was immediately declared cancer-free and remain so to this day. All glory to God! Hallelujah!

One thought on “By His Stripes We Are Healed #1:
Healing in the Atonement — Part 1”