Many are the times when I’ve heard objections raised against the doctrine of divine healing that go something along the lines of the following:

My aunt got prayed for by (famous healing evangelist’s name here) and she still died of cancer.

Many immature believers see faith and divine healing as some sort of formula that is supposed to work with the same ease of a baking recipe (aka add-water-and-stir Christianity), thinking that once someone is prayed for, the prayed-for individual is supposed to rise up miraculously in each and every case without exception or it’s a false doctrine. They operate by human intellect and reasoning, trying to put God into a box of their own creation that He effortlessly and successfully evades in every case.

Either that, or they think it’s about them doing some stupid, dead religious work to buy God’s favor or prove to Him that they indeed have “faith,” such as withholding medical treatment or medicine from themselves or their children. Such people are deluded into thinking that if God doesn’t supernaturally and miraculously perform the healing, then it isn’t Him, it’s from the world system/devil/human understanding or whatever other drivel they may have bought into without reading their Bible accurately.

And these sorts of incidents scare off many sincere believers who are otherwise eager and willing to do whatever God tells them, but are scared of being “weird” or some other excuse, again because they haven’t been reading their Bible accurately, having been brainwashed by the traditions of men.

While many have been truly healed through the laying on of hands by someone anointed by the Holy Spirit with the gifts of healings and miracles, there are also far more believers who have received their healing through simple faith in the promises in God’s Word.

This article is written to deal with that process.

We receive our salvation through a revelation of God’s Word concerning His desire, willingness, and provision to save us from our sins through grace alone by our faith alone in the blood of Jesus Christ and the finished work of the cross. That revelation comes through the enlightenment of the Holy Spirit Who opens the Scriptures to us so that we can receive Christ. Part of that revelation includes the “how” of receiving salvation, that we are to confess Jesus as Lord and believe in our hearts that God raised Him from the dead (Romans 10:9-10).

This is just the tip of the iceberg, though. We receive everything from God in the precisely same way: confessing with our mouths the Word of God and believing it in our hearts, asking God for our needs to be met through prayer.

Interestingly enough, at the time we receive salvation, we usually know next to nothing about God and His incredible love for each of us. I mean, seriously think of what it is we actually are believing when we get saved:

About 2000 years ago, a Jewish carpenter walked around a small area of the Middle East preaching, performing miracles, and living a life totally devoid of selfishness. He proclaimed Himself to be God and was tortured and executed for that claim by the local religious and government officials of the day. But He really was and is God-in-Sandals and He was resurrected from the dead 3 days after His execution. The blood He shed washes away all the guilt and penalties for our past, present, and future selfish acts and, upon our own deaths, allows us entrance into a place called Heaven where there are no tears, guilt, shame, or pain and we will live with Him there forever. He gives us all of this as a free gift once we swear total allegiance to Him, allowing Him to run our lives as Absolute Ruler.

No wonder Paul says in 1 Corinthians 1:23 that this is foolishness to the Greeks (the humanistic intellectuals of the era)! To the natural, unenlightened-by-the-Holy-Spirit human mind, what we believe is preposterous!

Yet we Christians do believe this to the point that we are willing — and in certain areas of the modern world, do! — suffer torture and even go to our own deaths singing praises to God rather than deny it. We also order our thinking and behaviors according to His precepts, rather than those espoused by the cultures and societies we live in. In fact, the biggest miracle you will ever experience as a believer is your own salvation when, with minimal knowledge of God’s Word, you were raised from the dead spiritually and made alive in Christ!

I am personally convinced the primary roadblock preventing many believers from receiving divine healing is simply that they do not accept and receive it by faith with the same tenacity and vigor that they apply to their salvation.

How Much Faith is Enough? 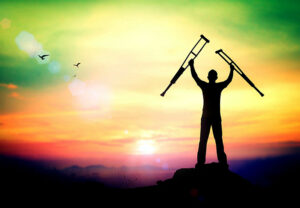 Now some of you just read the previous paragraph and immediately assumed that I am accusing people of not having enough faith. To which I would respond, “Well, how much is “enough?” You see, the “having enough faith” question puts the onus back on us and our performance, rather than focusing our attention where it should be: the grace of God and the Person and finished work of our beloved Savior, Jesus Christ.

Once we get our eyes onto ourselves and our own performance, we immediately start thinking that we need to do something to “prove” to God that we have enough faith or are “worthy” enough to receive His blessings. This very mindset drives the scripturally ignorant and spiritually immature to deny medical treatment for themselves and/or their children or make pilgrimages to “holy sites,” such as the famous spring at Lourdes, France, or to attending evangelistic healing meeting after meeting, all the while trying to earn their healing from a God Who offers it as a free gift.

In other words, they operate on a healing-by-works basis, just as many try to operate on a salvation-by-works basis, neither of which gets them anywhere with God. The encroachment of man’s religion and God’s view of it (“our righteousness is like filthy rags” — Isaiah 64:6) is in play in both cases. Interestingly, the Hebrew word for “filthy rags” in this verse literally translates as “a garment soiled from the waist down,” which means our attempts at earning God’s favor are about as valuable and useful as dirty diapers or skid-marked underwear!

Faith is the natural result of our receiving heart-knowledge of God as revealed by the Holy Spirit through His Word. So if we lack faith in some aspect of God’s Word, it’s because our revelation in that area is lacking or incorrect.

Returning to our previous comparison, when the Holy Spirit revealed to us that God has provided the means for our salvation through Jesus, we responded in faith to that new knowledge, submitted our lives to the Lordship of Jesus, and got saved. When the Holy Spirit reveals that God has also provided the means for our healing through Jesus, we respond in faith and get healed.

So the issue here is not one of us having “enough faith,” but is our level of revelation sufficient for the task at hand? Here is a fundamental truism of Christianity:

All “faith problems” are rooted in an insufficient or inaccurate revelation of God’s character, will, and/or ability.

Let’s break this down in a bit more detail.

God’s will is His Word, period. If He promises something in the Bible and all of the conditions, if any, attached to that promise are fulfilled, He will affirmatively answer a prayer based upon that promise every time without exception. There may be a time lag between the provision and the prayer, He may answer by a different means than we have preconceived with our puny human intellects, but God is faithful — He will deliver what He has promised.

God is good and He does not visit evil upon His children, though He can and does allow us to experience the consequences of our bad choices or He will withhold earthly blessings when we are disobedient. If a human father were to physically injure his children or infect them with a sickness to teach them a lesson in humility, obedience, or whatever, we would be horrified at such behavior and justly put that demented father in jail for child abuse. Yet, somehow, Catholics and Calvinists believe that our Heavenly Father does precisely those sorts of things for precisely the same purposes, their escape clause being that God has thoughts higher than our thoughts and His plan will somehow come out for our good, though we cannot see it.

However, nowhere do we see this demonstrated in the life and ministry of Jesus Christ during His earthly ministry. Indeed, Jesus Himself touched on this issue in His Sermon on the Mount:

If you then, being evil, know how to give good gifts to your children, how much more will your Father who is in heaven give good things to those who ask Him! Matthew 7:11

The Scriptures repeat over and over that God is not a respecter of persons. That means He is totally impartial in dispensing both blessings and justice. In light of what we have discussed earlier about our total unworthiness to receive anything from God apart from His grace, there are no “superstars” in the Body of Christ. As Billy Graham’s old saying goes, “the ground is always level at the foot of the Cross” and there is no “high ground” — moral or otherwise — for any human to stake out, claiming special access to or favor with God.

The bottom line is that, if God will answer the prayers of Billy Graham, the Apostle Paul or some other mighty man or woman of God we admire, He will answer yours, too!

God is omnipotent, a ten-dollar theological term that means “all-powerful, infinitely capable, possessing limitless ability.” And when we speak His Word, it carries the same creative and miraculous power that it did when He originally spoke them. The same God who spun the universe into existence and keeps it running by His Word also has all the power, energy, means, whatever required for Him to deliver on any promise He has made to us. So whether He heals us by supernatural miraculous means or through human medicine is all the same to Him.

How Do We Obtain Revelation Concerning Divine Healing?