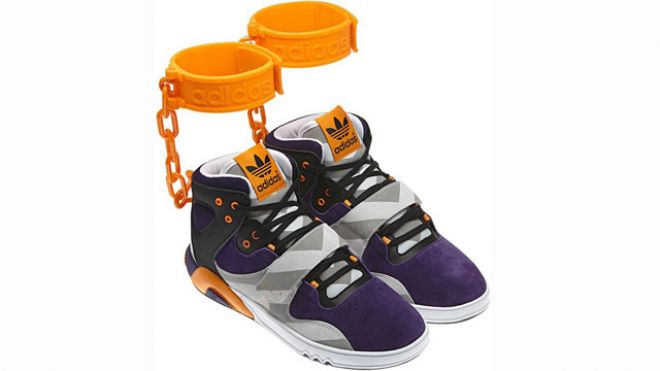 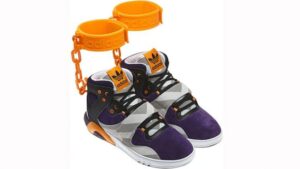 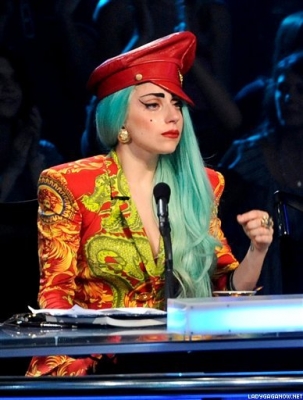 I personally think there are more than enough folks of all ethnicities out there who have the execrable taste required to not only buy these sartorial atrocities, but actually wear them.

Here’s some great advice for all people of color who are afraid these shoes would make them look bad by playing to racial stereotypes:

If members of minorities boycott them, then the whole racial stereotype issue is completely gutted because none of them will even remotely be associated with prison inmates because of their shoes.

One of the issues is the corporate silliness of Adidas for coming up with this tasteless fashion concept in the first place. I’ve ministered extensively in jails and prisons and, among all the things one could say about them, one is leg irons are not stylish fashion statements, no matter what color person they may be attached to. This is making light of something truly tragic in the lives of those who are incarcerated. Even though the vast majority of them deserve to be there, that doesn’t lessen the devastation and degradation of it all one single bit.

Compounding all that is the feigned reactionary hysteria on the part of opportunistic black activists who cry “RACISM!” every time they see something they can blow completely out of proportion to create a buzz for themselves. Their words proclaim “I’m defending our race from the bad guys!” when in reality it’s all about venal self-aggrandizement and money.

Racism is Not an American Invention 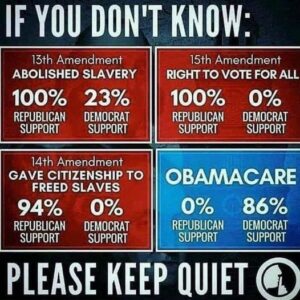 The real problem is that, despite the many advances people of color have made against racial discrimination and stereotypes, such attitudes still exist throughout the US and indeed the world. We Americans tend to have this mindset racism is an attitude unique to white people, when in fact prejudice based on skin color has existed and still exists in virtually every corner of this planet since Adam and Eve ate the forbidden fruit. Frankly, I would’t be surprised if homo sapiens discriminated against Neanderthals and I’m not joking here one little bit!

Examples? The castes in India were based upon skin color with “untouchables” being those with the darkest skin and the top-of-the-food-chain Brahmins having the lightest. The eta in feudal Japan, who were despised and relegated to the dirtiest, nastiest occupations in that society, were its darkest-skinned members.

Throughout the third-world to this day, light-skinned Africans, Arabs, and Asians look down on their darker-skinned counterparts. Why? Because a lighter skin color denotes wealth and privilege — rich people are able to stay indoors out of the sun, so their skin is lighter. Those working in the fields/rice paddies and at other menial outdoor occupations of the poorer classes are constantly in the sun, so their skin is correspondingly darker. Truth be told, only white folks think tanning themselves is a neat idea!

The Body of Christ is supposed to be leading the way in overcoming racism, but has failed on multiple occasions due to the infiltration of man’s religion into our churches. Despite how many misguided preachers of times past and present have committed hermeneutical violence on the Scriptures, twisting and distorting them suit their personal or regional racist agendas, the Bible is very clear about God not being racially or sexually biased:

Endemic racism throughout the entire earth is a genuine tragedy for all who are oppressed by it. Things are bad enough as it is without “defenders of the race” creating false crises that decrease the credibility of those who really are sincerely championing equality.

Time for an analogy to illustrate my point. In the world of electronics we have something called “noise.” Prime examples of noise are the static you hear on your radio or the “snow” you see on a TV when they are not tuned to a channel or when they are tuned to a station with a weak signal. Noise is present in every electronic device ever created and electronic engineers go to great lengths to suppress it in their product designs. Why? Because when noise exists at a sufficient volume, it drowns out the information such devices are designed to transmit.

These self-proclaimed “spokespersons” and organizations dedicated to racial equality, who create tempests in teapots over imagined racial slights, are the noise drowning out the real signal from the Throne of God: love one another, regardless of ethnicity, as I have loved you!