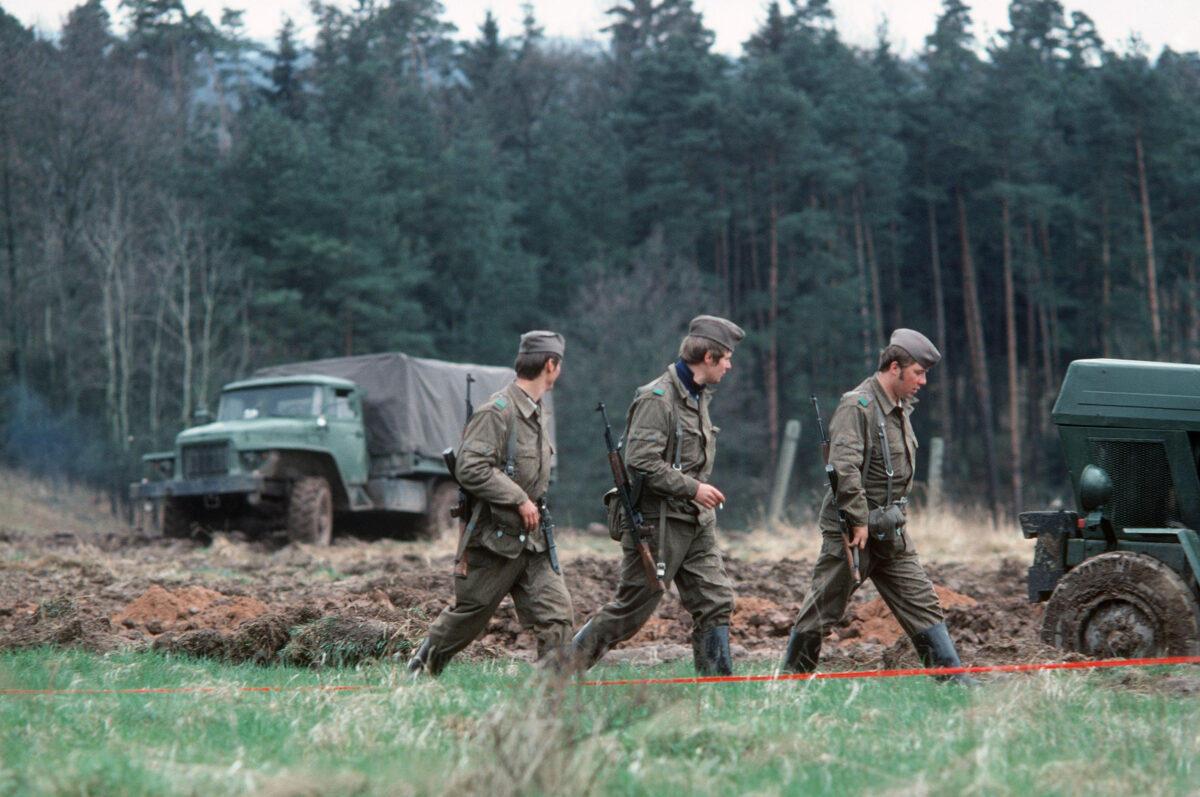 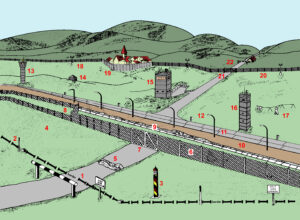 A couple of friends of mine from our former church in Tucson were posting earlier today on Facebook about the fall of the Berlin Wall back in 1989-1990.

It reminded me of when I was in the US Army in then-West Germany (Federal Republic of Germany or FRG) back in the early 1970’s and they took a bunch of us GIs assigned to Headquarters Company, 1st Battalion/33rd Armored Regiment on a standard orientation tour of the border with East Germany (Deutsche Demokratische Republik or DDR). The tour was intended to instill in us a vision of why the US Army was there: protecting the FRG — and in turn, the Free World — from the tyranny of Communism and the Soviet Union during the dark days of the Cold War.

The section of the border we toured is in what is known as the “Fulda Gap.” This German geographic feature contains two corridors of lowlands through which the Soviet Army and its Warsaw Pact allies could have launched a surprise attack in an effort to gain crossings over the Rhine River and achieve domination over Frankfurt and Bonn, the FRG’s financial and political capitols, respectively (upon German reunification, the political capitol was returned to its traditional location, Berlin). 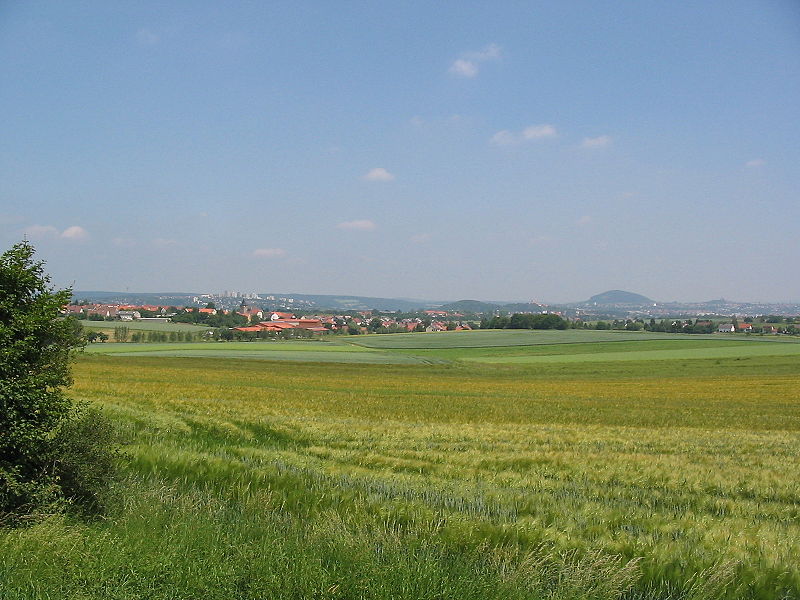 Also, the sister airfields of Rhein-Main AFB and the international airport in Frankfurt were the primary facilities through which reinforcements would be received in-country, so keeping those runways open for their arrival was crucial to US military strategy.

The immediate border was patrolled by the 11th Armored Cavalry Regiment — they monitored Soviet troop movements and were the tripwire which would have triggered a US armed response if an invasion had occurred. 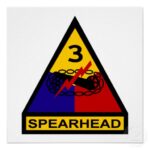 Our division, 3rd Armored Division, was the “speed bump” — our task was to be cannon fodder to delay the Russian advance until such time as reinforcements could arrive from the US and mate up with their pre-positioned equipment stored in West German depots.

The Structure of the Fortifications 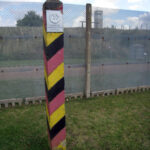 This is a border obelisk. The area between it and the fence is the first of the minefields.

The actual border boundary itself was rather unimpressive, simply a plain piece of wire stapled to the top of posts about 18″ high, with 6′ black, red, and yellow concrete obelisk markers placed periodically along the way.

What was impressive — and disturbing — was what was behind that wire! Starting from the west and moving east:

So that was the DDR border area. It consumed 2,770 square miles, over 6% of the DDR’s total land area. Within this area, economic activity was severely curtailed or ceased entirely. To this day, no one knows precisely how much it cost to build and maintain the DDR border fortifications. The building cost of just one of the 30′ watchtowers was about 65,000 Ostmarks (roughly $16,250 in 1970s dollars) each and the expanded metal fences cost over 244,250 Ostmarks (roughly $61,000 in 1970s dollars) per mile.

Who Manned The Border? 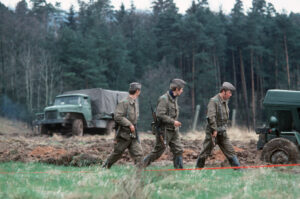 A DDR Grenztruppen Construction Crew. Note the “red cord of death” used during border construction and maintenance. If someone wandered past the cord, they were summarily shot. (click image to enlarge)

Manning this barrier were 50,000 Grenztruppen der DDR (border troops) who were themselves subject to being shot on sight if they crossed the “red cord of death” during the construction phase of the project. The Stasi (the DDR’s counterpart to the USSR’s KGB) had a special unit dedicated to infiltrating Grenztruppen units to weed out potential defectors from the ranks. It is estimated that one-in-ten officers and one-in-thirty enlisted men had been recruited by the Stasi as informers. 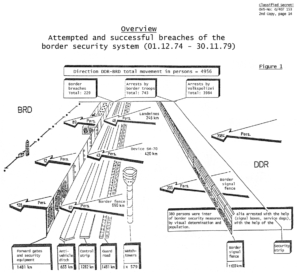 By 1983, the cost of maintaining the border (infrastructure repairs and manpower) was 1 billion Ostmarks annually. In 1989, DDR economists estimated that each border arrest cost 2.1 million Ostmarks which was 3 times the average “value” to the state of each working person.

Before the border fortifications were finished, about 3,000 East Germans escaped to the West each year. After completion, the stats averaged 45 people/year — they and God only know how they got out successfully.

One of those successful escapes was made by two families via a homemade hot-air balloon. The story of that escape was later made into a 1982 Walt Disney movie entitled Night Crossing. The movie is also available on certain streaming services. It’s well worth seeing!

Why Should We Care About All This Decades Later?

It existed for the sole purpose of keeping East Germans in East Germany, nothing more, nothing less.

And those citizens very possibly could still be under the oppression of that totalitarian regime to this day, had it not been for Ronald Reagan causing the USSR to bankrupt itself trying to keep up with the US arms build-up of the 1980s.

From my perspective, it’s a tragedy that 99%+ of Americans are completely oblivious to the details about that abomination of a border to this day. In my opinion, such knowledge would have completed gutted many people’s inexplicable attraction to the liberal left and its inherently socialist agenda. One look at that fence would completely destroy any credibility socialism and communism might have had because it was a silent, but powerful, reminder that socialism doesn’t work!

“But such a repressive totalitarian regime could never happen here in the US!” many would protest.

That’s the same thing the Germans said about themselves just prior to the rise of Adolf Hitler, who was by the way, a socialist (Nazi is the abbreviation for National Sozialistische Deutsche Arbeiter Partei which translates to the National Socialist German Workers’ Party. We are ripe for a demagogue, and if we don’t replace our current bozo (at the time of this writing, Obama) in the White House, we are extremely likely to have one on our hands permanently. There are many similarities between our current political situation and those of pre-revolution Russia and pre-WWII Germany.

‘Those who refuse to learn from history are condemned to repeat it.’ George Santayana, philosopher