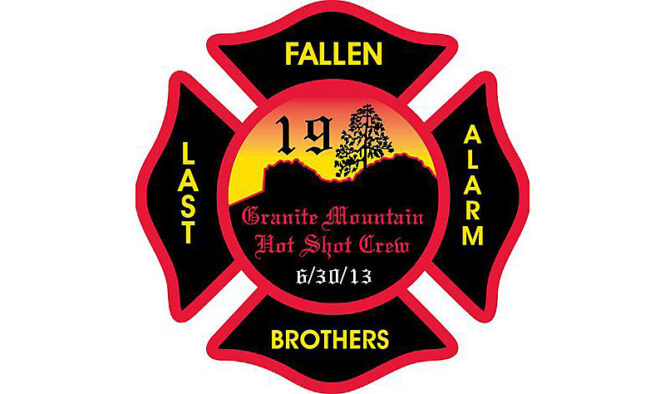 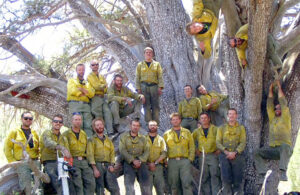 On June 30 of this year, 19 firefighters of the Granite Mountain Hotshots, an elite wilderness firefighting team fielded by the Prescott, Arizona Fire Department, died while fighting a wildfire in Yarnell, Arizona.

They were caught out in the open when a sudden wind-shear reversed the course of the fire back towards them, overwhelming the team long before they could reach safety. Their personal emergency fire shelters proved ineffective and they either died from the overwhelming heat or asphyxiation.

The tragedy made national news. 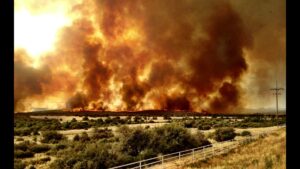 The Granite Mountain Hotshots were the firefighting counterparts of Army Rangers or Navy SEALs, a highly skilled, highly trained, highly motivated group of professionals who endured tremendous hardship to put out such fires with little or no public recognition. They were a national asset, on call to fight wildfires all over the US, so the whole country is worse-off for their loss. This team also represented a significant percentage — about half! — of the Prescott Fire Department’s personnel and the team’s leader was being groomed to be a future fire chief.

Six of these brave men were members of our church family. One of them, Clayton Whitted, had actually been on staff for a time as a youth pastor until he resigned to return to the team, having determined that firefighting was his true calling. From what I hear, most — if not all — of the team members were believers. One of my wife’s closest friends and coworkers is the mother of one of the deceased. 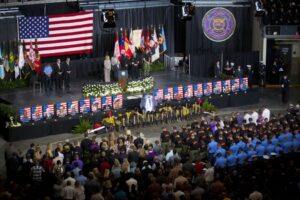 Granite Mountain Hotshots Memorial Service. My pastor is the man behind the podium. (click image to enlarge)

The whole quad-city metro area of Arizona (Prescott, Prescott Valley, Chino Valley, and Dewey-Humboldt) is still reeling in shock. An inter-congregational memorial/prayer service for the families and local citizens was held on July 2 at the Prescott High School football field with the grandstands and much of the field itself packed solid with well over a thousand people mourning the loss of these men who had literally laid down their lives to save another town’s people and homes. The service was so moving that there wasn’t a dry eye in the bunch, including mine and I had never even met any of those who had been killed by the flames.

Fire departments from all over the region and well beyond sent representatives and even fire engines to attend the subsequent memorial service. There were so many in attendance, the service had to be held in a local hockey stadium. My pastor, Ron Merrell, officiated.

My first 10 articles in this blog are a refutation of the prevalent-throughout-Christendom idea that even after Jesus came on the scene, God visits disaster, death, destruction, and calamity upon His children to teach them something or upon the lost as a judgment. So why am I adding an 11th article long after I had considered the series to be completed?

Because such events as this disaster cause us to cry out the question,

We human beings hate unsolved mysteries and we are always looking for answers, especially when it comes to God. Finite and frail, we humans prefer our gods to be tame and predictable. We hate unanswered questions because we find security and control in their answers; the absence of answers leaves us feeling afraid, vulnerable, and insecure. Such situations cause us to question our faith at times and check our hole card as to what we really do believe as Christ-followers.

By now, I would expect many of you are hoping I am about to answer that question and indeed I am.

And anyone who says they do know is trying to sell you something, almost certainly snake-oil.

Whenever disaster strikes, our human tendency is to try to find fault because someone has to be to blame for it, somebody must be held accountable because our inherent sense of justice demands it. I overheard one woman at the prayer service say beforehand that there was some sort of cover-up, that the fire department leadership had not done its due diligence in getting people onto the blaze in a timely manner.

The extensive post-mortem of the events leading up to this tragic loss of life will ultimately reveal the truth, but personally right now, I don’t buy it. Why do I say this? Because the fire chiefs went around to each and every volunteer at that service, shook their hands, and, with tears welling in their eyes, thanked them. I didn’t observe any of the depraved indifference which would accompany a cover-up, so I think the woman was simply someone who desperately hungered for an answer to that question and conspiracy theories are a convenient and intellectually unchallenging means to meet that need. 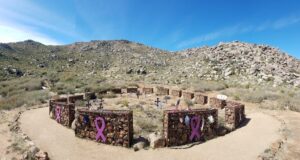 Granite Mountain Hotshots Memorial State Park at the actual site of the disaster. Each marker represents the precise location where a team member perished. (click image to enlarge)

And if some human-based procedural or leadership error cannot be blamed, then people start in on who to blame spiritually, usually accusing the victims of some sort of sin that brought God’s judgment onto them (as in Job’s “comforters”). If not that, then they resort to blaming God somehow, flailing about doctrinally, trying to reconcile in their minds the idea of a loving God Who either caused or allowed such a tragedy to come to pass to serve some sort of divine purpose, the very concept this series is devoted to refuting. That bunch at Westboro Baptist Church in Topeka, Kansas have reached the ridiculous conclusion that such appalling loss of life is caused by our tolerance of homosexuality in the US, a conclusion I cannot buy in the slightest.

Bottom line? That is NOT the Jesus Who I love and serve.

But the truth of the matter is there are times when our theology is not up to the task of explaining such a situation to our satisfaction. It fails because we are flawed humans with very limited and cloudy perceptions of reality on this earth and an almost total ignorance of what transpires in the spirit realm. Therefore any systematic theology is going to have one or more holes in it, despite the wonderful revelation and illumination we receive from God’s Word.

While I have a pretty solid grasp of what we should and do believe as Christ-followers (and believe in that grasp strongly or I wouldn’t bother writing these articles), I certainly have no pretensions of perfection for the theological views I present here.

The Secret Things of God

Another factor is this: God reserves a great deal of knowledge for Himself that we are not permitted to see, plain and simple:

The secret things belong to the Lord our God, but those things which are revealed belong to us and to our children forever…Deuteronomy 29:29a

So while we just cannot fathom why such tragedies happen to men who love Jesus, who were devoted to their families, and selflessly served the public by placing their lives on the line fighting wildfires all over the US, we are called upon as believers to trust and obey a loving God Who remains silent on the topic. And that ain’t easy, especially if you are one of those directly affected by this tragedy.

I faced a similar challenge when I was diagnosed with a cancerous kidney tumor last December. From Day 1 of the diagnosis, my trust was fully in Jesus’ finished work of the Cross and the promises of God for healing found in both testaments. I had no doubts, no fears, an act of God’s grace I am still grateful to God for.

The only moment of fear took place when I heard of the death by cancer of Rochelle Nieman. She and her husband Charles have pastored a church in El Paso since the 1970s, believing and preaching the healing power of God all along the way.

And the devil came to me, saying: “If it didn’t work for her, why should it work for you?”, a variant of his question to Eve in Eden: “Has God said?”

I thought long and hard about it for an hour or so and finally concluded it was not my purview to try to analyze or judge why it didn’t work for my sister in Christ, but that it was my job to believe God’s Word concerning healing my body, even if everyone else on the planet who were believing God for their healings died without receiving them. Once I settled the issue in my heart, the fear left and, after surgery last February, I am now officially cancer-free, having just completed my 3-month follow-up examination.

So, despite the death of my brothers in Christ on the fire line, my faith in God for His protection and deliverance from evil remains resolute because that faith is not based upon the circumstances I see around me, but in His Word, the only safe Rock upon which we can stand.

So should your faith be, as well.

The Rest of the Story

So we’ve now covered what we don’t know. Here’s what we do know:

Those who died that day (click image to enlarge)

So that about wraps it up for me.