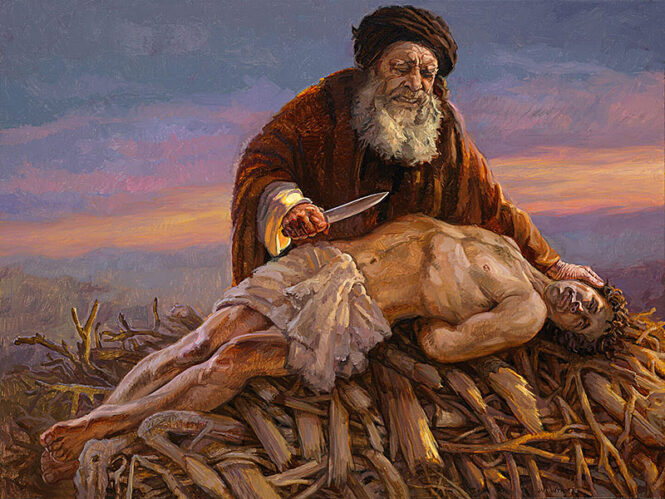 In my last post, I began making the case that the God of the Bible does not go around killing His children, inflicting them with diseases, or causing disasters.

Many people would contest this claim, asking, “Well, what about the Old Testament?”

Whole books have been written about this; I’m not going to delve into the subject in near that kind of depth because the answers aren’t that complicated once you understand some principles from Scripture. It was once said that, “The Bible is shallow enough for the simple to come and drink and deep enough for theologians to drown in.” I’m going to approach this question from the shallow end of the pool. 🙂

The principles in play here are the following:

What is a Blood Covenant?

The concept of blood covenant is both ancient and 100% biblical. There are many examples of people entering in covenant relationships with one another in the Old Testament. The covenant between the soon-to-be-king David and Saul’s son Jonathan is but one that comes to mind.

By far the single most important covenant relationship in the OT is the one between God and Abraham. Why? It is this covenant that forms the very foundation for our redemption in the finished work of Jesus Christ centuries later.

The details of how covenants were established is not the important factor here — the results and benefits of entering into a covenant is. When two people entered into covenant with one another, each was pledging that all their own goods, family, and wealth were at the complete disposal of the other party and to each party’s descendants forever. We see this echoed in the marriage covenant to this day: all the earthly goods of the husband and wife become mutual (community) property — at least in most states and in the absence of a pre-nup, that is! 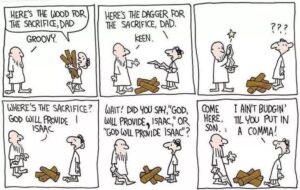 And so we approach a story in the OT where many people — quite a few of them theologians, I might add — simply can’t seem to get it right: the story of God commanding Abraham to sacrifice his son Isaac. I have heard more cockamamie, half-baked nonsense about this one story than any other passage in the entire Bible, other than the entire book of Job!

Notice in the story how Abraham didn’t quibble with God about the issue — he simply packed up his son and their accoutrements and headed off for Mt. Moriah.

Because he knew the requirements of a covenant.

We know what later transpired: as Abraham’s knife was descending to kill his son, the Lord stayed his hand and told him his willingness alone was sufficient to prove his faith in and obedience to the Lord. In this way, Abraham demonstrated he was willing to sacrifice his beloved son of God’s promise for his covenant partner, God.

This event, standing alone, has no historical context and therefore means nothing, thus explaining why so many scholars — especially Jewish ones — come up with such ridiculous interpretations for it.

That event’s historical context and true significance surfaces about 2 millenia later where God repaid Abraham’s willingness in kind by actually sacrificing His only Son, Jesus Christ, on the cross — interestingly enough, in that same location, give or take a few yards — and thereby purchase the redemption of Abraham’s descendants (the Jews) as well as all mankind who would accept His gift by faith.

That is why Christianity honors Abraham as the “father of our faith.”

The other nations of that era didn’t have a covenant with the Almighty. They were idol worshippers bowing down to the likes of Baal, Ashtoreth, Molech, and the like. Much of their worship included all sorts of sexual misbehavior and perversions, including temple prostitution, homosexuality, and bestiality (sex with animals).

Worshippers of Molech burned babies alive as part of their rituals. Nowadays, disciples of that same demon perform abortions, but that is a subject for another thread (not now, Cato, now is NOT the time!).

By the time the Israelites entered the Promised Land after being delivered from Egyptian bondage, many of these pagan city-states had been given over to such vile practices for so long the entire population had become infected with venereal diseases — including the animals! So to prevent the spread of these diseases and the practices which perpetuated them to the His people, God commanded the Israelites to destroy these cities and kill every man, woman, child, and animal to stamp out every vestige of their practices and the results of those practices.

Thus, at stroke, God executed judgment upon those nations for their false religions and perverse sexual behaviors, as well as preventing these practices and their public-health-disaster consequences from infecting His people.

Next post, we’ll discuss the downside to blood covenants: the consequences of breaking one.