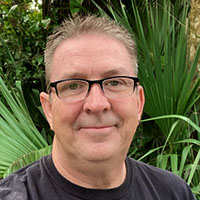 I am ecstatic to announce yet another new addition to our family of contributors here at Miscellaneous Ramblings: one of my closest and dearest friends, John Foster!

John is someone I have always admired and looked up to; first as a mighty man of God closely followed by his amazing talents as a graphic designer, sign painter, pin-striper, and bass guitarist (case-in-point: the site banner for Miscellaneous Ramblings is his design!) He is in such demand as a car artist, he travels around the Midwest, Southeast, and Southwest creating custom pin-striping, business signage, and gold-leaf work on race cars, custom cars, and motorcycles of all types.

On top of all this, he is associate pastor of the church he and his wife Stacey belong to. Stacey is a gifted pianist/songwriter/worship leader, a published author, and a passionate soul-winner, as well. Individually and collectively, they are a formidable spiritual force for the Kingdom of God!

In addition to John’s and my mutual loves of music (especially jazz!) and graphic design, we also share a passion for both antique and RC aircraft, high-performance cars/motorcycles, and computer gaming. I cannot remember a time when we have ever run out of conversation topics. One of my fervent heart-felt prayers is God will co-locate us geographically sometime soon. In the meantime, we are on the phone almost daily. He is truly my brother-from-another-mother.

I first met John at church back in 1996 when I was freshly moved to Wichita, Kansas from Oklahoma. I was flying solo at the time, starting a new job in a new town, knowing no one while my wife and son temporarily remained behind in Tulsa as I got established and she sold our house. I had already become acquainted with Stacey a few years earlier at church in Tulsa before she moved north and they met and married. During John’s and my encounter that first Sunday, he invited me over for grilled burgers, an invitation which became an instant weekly tradition until they later moved to Tulsa to attend Domata School of Missions in preparation for the mission field. It’s a safe to say that whenever I wasn’t at work or church, I was either hanging out at Chez Foster or somewhere else out and around Wichita with John.

After Domata, they became missionaries to the nation of Estonia for several years in the late 1990s through early 2000s. During my midlife crisis in 2001, John and Stacey came back to the US on furlough. When John heard I was in crisis, he took time out of his vacation to jump on a plane to Reno, Nevada to be with me for a week in early September 2001. Yes, he was with me on 9/11; that was the day he was supposed to fly back to Wichita. As the Yiddish compliment goes, John is a real mensch, a stand-up kinda guy who is always there for his friends wherever and whenever needed.

A few years later, they returned to the States for a time before embarking upon another missionary stint in Azerbaijan. Later they moved to the Space Coast of Florida where they live as of this writing.

John’s first contribution here will be to cowrite an article with me entitled, “The Good, The Bad & The Ugly,” currently in the works. After that, he will be writing whatever God puts on his heart.

Of one thing I am absolutely certain: you will be blessed by reading it.