You are in for a real treat!

One of my closest friends, a former pastor and mentor of mine from back in the day, has accepted my invitation to become a contributor here at Miscellaneous Ramblings.

You will see his name as William Burgess in his bylines here, but to those of us who have experienced the joy of being one of his congregants, he will always be “Pastor Bill” aka “PB”. His loving compassion is renowned among his former congregants. I remember well the people who used to spontaneously form a line after services simply to receive one of his hugs — me included!

Words cannot capture the incredible impact this man of God has had on my life and ministry. Despite my many character flaws and bad attitudes back in the early 1990s, he looked past them all and saw the call of God on my life, then lovingly poured his heart into mine by both word and example.

Without even a hint of hyperbole, I can safely say a vast amount of who and what I am today as both a Christ-follower and a minister is because this man had compassion upon me, a then-narcissist having zero clue about what being a minister of the Gospel of Christ was all about. As I have said elsewhere, he taught me the crucial difference between having a pastor’s call and having a pastor’s heart, as expressed in the meme shown here. 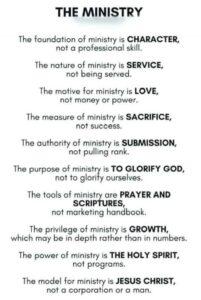 Fast forward to 2015 when I was privileged to return the favor by officiating at his marriage to an equally amazing woman of God named Shirley.

PB is the consummate evangelist, not only being used in personal evangelism as divine appointments arise during his daily life, but also in crusades in the Third World where he has been used of God to lead many to Christ as well as perform miracles of healing by the power of the Holy Spirit. If anyone is qualified to teach us a masters class on leading people to Christ, it is this man.

On top of that, he is an excellent teacher with an earned masters degree in education. Not only does he teach God’s Word with skill and passion, but he recently retired from being a high school art teacher much beloved by his students.

As if that isn’t enough of a resume, he also has an amazing artistic talent and expresses it using a variety of media ranging from pencil sketches to sculpture to ceramics to painting to chalk artwork on sidewalks. Whatever medium he chooses, his results are mind-blogglingly stunning to behold.

His first articles are currently in the works.

Fasten your seatbelts and prepare yourselves to be blessed!