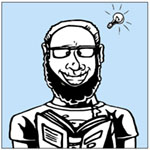 After reading some of my articles here, the retired founding pastor of the church we once attended labelled me a “theologue.”

As we discussed what he meant by the term, he made the following points:

His words brought to mind a passage from Ezekiel where it says:

God’s Message came to me: “Son of man, speak to your people. Tell them, ‘If I bring war on this land and the people take one of their citizens and make him their watchman, and if the watchman sees war coming and blows the trumpet, warning the people, then if anyone hears the sound of the trumpet and ignores it and war comes and takes him off, it’s his own fault. He heard the alarm, he ignored it — it’s his own fault. If he had listened, he would have saved his life.

“‘But if the watchman sees war coming and doesn’t blow the trumpet, warning the people, and war comes and takes anyone off, I’ll hold the watchman responsible for the bloodshed of any unwarned sinner.’

“You, son of man, are the watchman. I’ve made you a watchman for Israel. The minute you hear a message from me, warn them. If I say to the wicked, ‘Wicked man, wicked woman, you’re on the fast track to death!’ and you don’t speak up and warn the wicked to change their ways, the wicked will die unwarned in their sins and I’ll hold you responsible for their bloodshed. But if you warn the wicked to change their ways and they don’t do it, they’ll die in their sins well-warned and at least you will have saved your own life. Ezekiel 33:1-9 MSG

After some personal reflection, I realized my pastor friend had nailed it!

Long before he expressed his sentiments, I already had frequently felt like “a voice crying out in the wilderness” to a Christendom enthralled by humanist pop culture narratives and religious tradition. Rampant scriptural illiteracy and pervasive spiritual sloth are he most common reasons for becoming ensnared by those falsehoods.

Upon further reflection, I examined the label of “theologue” and asked myself the questions, “Self, is this really who I am? Can I be anything else while remaining true to God’s calling?” The respective answers were resoundingly, “YES!” and “NO!” thus leading me to conclude I can be nothing and no one else than precisely that.

Truth be told, I actually have no choice in the matter &mdash; at least if I want to one day hear those coveted words, “Well done, good and faithful servant! You have been entrusted with little; I will make you ruler over much.”

So I humbly accept the badge of “theologue” and now wear it with honor.