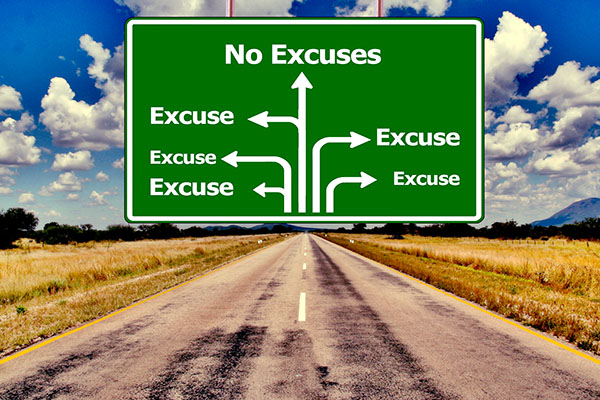 Awhile back, I had occasion to phone my former employer’s offices in Florida. As I was waiting on hold for my co-worker to pick up, I was blessed as I listened to one of our university president’s recorded class sessions they play in lieu of hold music. During that session, he was proclaiming the integrity of God’s Word, how we can depend upon its Truth and power without exception, and that if God said it, we should believe and act as if it is indeed true, regardless of external circumstances, popular culture, or public sentiment.

As he was teaching, he made a statement which has stuck with me ever since. He stated the doctrinal stances of many churches and denominations concerning this topic were a “doctrine of excuses.”

He went on to explain how much of what passes for doctrine these days consists of highly educated individuals spending the majority of their time explaining why “God doesn’t do that anymore” or how “God is trying to teach us something.”

The end result of so many decades of such theological nonsense is the Body of Christ overall has assumed a victim mentality. In other words, despite the multitudinous stories of God’s grace bringing about deliverance to and victory for his people, such teachers persist in trying to console us with the concept that we are suffering our own equivalent of “Paul’s thorn” as described in 2 Corinthians 11, and how God’s grace merely enables us to endure as we suffer through all the trials which only end after we enter our heavenly reward.

Where Does the Doctrine of Excuses Come From? 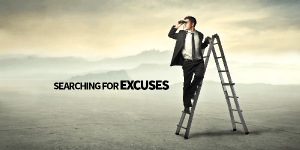 The doctrine of excuses arises from a human tendency to adjust the Bible’s claims to suit our opinions and experiences rather than His Word shaping our opinions and informing our experiences. In other words, whenever God doesn’t appear to deliver the goods we expect in the way we expect them and on our timetable, our sin-corrupted impulse is to place blame somewhere or on someone, most often the Chief Someone.

Don’t get me wrong here: God’s grace is more than sufficient for us to endure whatever life and the devil throw our way. I’m not contesting or minimizing that salient fact one iota! What I am saying is this: His grace is more than enough for us not only to endure, but be victorious in this life. There may be situations where we try to move a 2,000-pound spiritual boulder with our faith and fail, but the increased strength we acquire while doing so equips us to move a 300-pounder further down the road of our lives.

This is a Matter of Life or Death

Anyone familiar with my writings here at Miscellaneous Ramblings.com can attest how I have vigorously attacked this defeatist, victim mentality head-on using God’s Word, starting with the very first article I ever wrote and extending through another 10 articles on various facets of the same topic, not to mention over 90 others (as of this writing) which have touched on that selfsame topic in passing.

You may ask why I appear to be investing so much time and effort on this issue.

Here’s the answer: when we get our doctrine wrong, people die!

Some may dismiss this as melodramatic hyperbole, but hear me out.

First, though, I am not saying God smites us with death if we get our doctrines wrong. Not even close!

Now that we’ve settled that issue, let me illustrate my point:

A fundamental truism of warfare states poorly trained soldiers will commit one or more mistakes which will result in them and/or their comrades being seriously wounded at best, or killed at worst.

Why is this so?

It’s because when the effluent hits the rotating air circulation device, we fall back upon and instinctively do what our training tells us to do, those very things which have been drilled into us by both education and diligent practice. Many times, those things run contrary to our natural instincts and so-called “common sense.”

The “diligent practice” aspect of that equation is how we overcome those natural tendencies. Otherwise, we will neither have the required confidence in our ability to stand and fight nor will we make good decisions in the heat of battle.

Except in cases of pure dumb luck, such a soldier will:

When a soldier is properly trained, he defaults to the skills he has mastered. That good training will tend to bring about victorious results because he:

Now let’s carry that over into the spirit realm.

Given: the devil comes to steal, kill, and destroy in our lives and of those we love.

Whether the attack is addictions and compulsive behaviors, sickness and disease, calamity, poverty, persecution, no matter what the devil throws at them, they fall back on their training and the grace of God to defeat his schemes and tricks.

They endure hardships and privation until they either prevail in this life or their weapons fall from their cold, dead earthly fingers as they graduate to their heavenly reward.

But surrender is not an option.

On the other hand…

Those adhering to the doctrine of excuses tend to fall into one of two demographics: 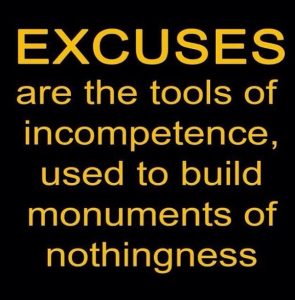 Both groups come up with bogus doctrinal stances to somehow shift the blame away from themselves and onto God, a time-honored tactic since The Rebellion in Eden. Both adhere to a form of godliness, but deny the willingness and/or power of God to intervene in their lives and actually deliver them from Satan’s attacks.

God never contradicts His Word, but He sometimes contradicts our corrupted-by-the-Fall intellectual grasp of it. In such cases, it is our responsibility to continue embracing His Word as absolute Truth while pressing into Him seeking revelation.

We are designed by Our Heavenly Father to engage Him and His Truth experientially. It’s not near enough to know about Him; we are created to know Him.

Everything which happens to us — good, bad, indifferent — is yet another opportunity for us to encounter Him more deeply, more intimately. It’s just as bad — sometimes worse! — to focus on our past successes as it is to focus on our present negative circumstances. There is only one proper place for our focus: Jesus, the Author and Perfecter of our faith.

Instead, we tend to relegate His Word to mere doctrine, rather than experiencing Him as “living and powerful, and sharper than any two-edged sword, piercing even to the division of soul and spirit, and of joints and marrow, and is a discerner of the thoughts and intents of the heart.” (Hebrews 4:12)

And, in my humble opinion, that refusal to engage and instead, play the blame game is why we tend to lose battles at best or live lives in total defeat at worst.