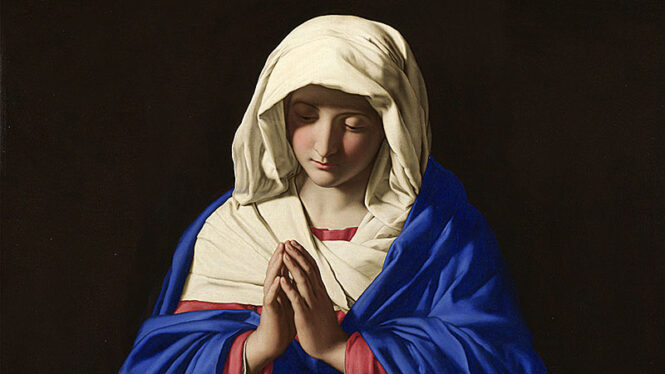 As we navigate the hoopla inherent to the season when we celebrate Jesus’ incarnation as God-in-Sandals, the Pew Research Center took a poll of Americans concerning Christmas. One of the questions asked was, “Do you believe that Jesus Christ was born to a virgin, or don’t you believe this?” 73% of those responding responded affirmatively, 19% responded negatively, and I guess the rest were undecided.

This is a remarkable statistic considering the current headlong race to secularize America and marginalize Christianity in the marketplace of ideas. Almost 3/4 of the American population accept one of the cornerstones — indeed an essential doctrine — of the Christian faith. This is a fairly exciting statistic until you take into account that for most of the respondents, this is merely an intellectual assent to Truth rather than a commitment allowing that Savior-born-of-a-virgin to actually “mess with their business” and effect life change.

Why is the doctrine of the virgin birth so crucial, so important that it is an essential cornerstone doctrine of the Christian faith, appearing in all three Christian creeds (Apostle’s, Nicene, and Athanasian)? Why does it matter? Why should we care?

It has everything to do with Who Jesus and His Father are and — more importantly — are not. The answer to that question has a bearing on the eternal destiny of every human being that has ever lived, now lives, and ever will live.

Back to the Garden

Sherman, set the Wayback Machine to the dawn of mankind! Yes, Mr. Peabody! 🙂

Genesis 2:7-25 recounts God’s creation of humankind’s progenitors, Adam and Eve. Our take-away today from that passage is that Adam & Eve were created holy and blameless, totally without sin.

The following chapter recounts how Adam and Eve were tempted by Satan and fell:

So when the woman saw that the tree was good for food, that it was pleasant to the eyes, and a tree desirable to make one wise, she took of its fruit and ate. She also gave to her husband with her, and he ate. Genesis 3:6

The important take-away here, at least for the purposes of this discussion, is that Eve was deceived and Adam wasn’t, yet he ate anyway. And thus, sin is passed down from that father through his children on and on through the generations since. Why? Because every species reproduces after its own kind. Dog beget dogs, cats beget cats, and sinners beget sinners.

As we read on, God pronounces His judgment upon Satan, yet in the same breath prophesies the coming Savior, a second Adam:

Now wait a minute! Men have seed, women have eggs, so what’s this stuff about “the seed of the woman?” It prophesies a Child Who is born apart from the seed of an earthly father will crush Satan’s authority on this earth, though Satan would wound Him.

I’ve dealt with the topic of spiritual authority elsewhere in this blog. The point I’m making here is that from the very moment of God’s judgment on Satan as well as Adam and Eve’s sin, He foretold the coming of a Savior conceived and born of an earthly mother without any procreative contribution from an earthly father.

Therefore the Lord Himself will give you a sign: Behold, the virgin shall conceive and bear a Son, and shall call His name Immanuel. Isaiah 7:14

As you may already know, the name “Immanuel” means “God with us” — literally “with us is God.” This prophesy both confirms the prior Genesis prophesy of the Messiah’s virgin birth and also directly states that the resulting Child would be God in human flesh.

I’ve said all that to say this: for God to redeem mankind, He needed not only to have a man willing to sacrifice himself for the sins of all mankind, He also needed someone qualified to do so. He needed a second Adam, someone without the sin nature inherent to every other man and then He needed that man to be tempted with selfishness just as Adam was, yet pass rather than fail the test. The only way to produce such a human being was for God to father one Himself by means of a human woman, a virgin and then allow His offspring to be tempted by Satan.

And we read in the Gospels how Jesus overcame the temptations of Satan, was tortured and crucified (Satan bruising of His heel), then was raised from the dead, triumphant over death, Hell, and the grave (He crushed Satan’s authority).

And you, being dead in your trespasses and the uncircumcision of your flesh, He has made alive together with Him, having forgiven you all trespasses, having wiped out the handwriting of requirements that was against us, which was contrary to us. And He has taken it out of the way, having nailed it to the cross. Having disarmed principalities and powers, He made a public spectacle of them, triumphing over them in it. Colossians 2:13-15

Let this mind be in you which was also in Christ Jesus, Who, being in the form of God, did not consider it robbery to be equal with God, but made Himself of no reputation, taking the form of a bondservant, and coming in the likeness of men. And being found in appearance as a man, He humbled Himself and became obedient to the point of death, even the death of the cross. Therefore God also has highly exalted Him and given Him the name which is above every name, that at the name of Jesus every knee should bow, of those in heaven, and of those on earth, and of those under the earth, and that every tongue should confess that Jesus Christ is Lord, to the glory of God the Father.Philippians 2:5-11

I am He who lives, and was dead, and behold, I am alive forevermore. Amen. And I have the keys of Hades and of Death. Revelation 1:18

Jesus is the only human being Who has ever walked this earth Who is qualified both by birth and by performance to be the Savior of mankind.

And by making Him Lord over our lives, we receive the benefits of that.

Again, Merry Christmas and have an awesome 2014!

One thought on “Virgin Birth?”