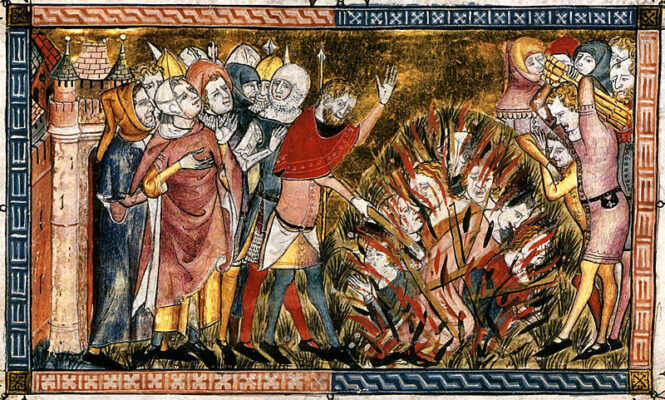 What the Heck is a “Blood Libel?”

The so-called “blood libel” is a theological fiction perpetrated by both Roman Catholic and Eastern Orthodox traditions — and decades later carried to its logical conclusion by the Nazis during the Holocaust — that was used to justify the persecution and murder of literally millions of Jews over a time period spanning most of the last two millennia.

It was this very issue which caused many Jewish community leaders to be up in arms protesting Mel Gibson’s excellent movie The Passion of the Christ because they were terrified this historically accurate portrayal of Jesus’ trial, torture, and execution might incite yet another generation to embrace this lie from hell and Jews would be subjected to yet another round of persecution as a result.

Can’t say that I blame them, either!

You would think folks would have moved away from such theological drivel as they became more “enlightened,” but this false doctrine is evidently alive and well in one of the bastions of American liberalism with its Newspeak definition of “tolerance,” Harvard University. Just this week, the student-run “Christian” club at that august institution published an op-ed piece in their newsletter beating this same dead horse yet again. I mean, really — is this actually the highest excellence our so-called “best and brightest” can come up with? But I digress…

We Christ-followers look at the Jews and marvel they cannot see that Yeshua (Jesus) is in fact their Mashiach (Messiah). I mean, it’s pretty obvious to us, right? While there are certainly multiple reasons for this disconnect, the persecution of Jews by people who purport themselves to be Christians ranks at or very near the top of that list.

Let me speak directly here so I cannot be accused of burying the lead: Like all other forms of racism, anti-Semitism is completely inconsistent with the Spirit of Christ and the New Testament, period.

Where Did They Come Up With This Nonsense, Anyway?

Here is the single verse (the underlined sentence in the passage below) that such folk use to support this virulent and unscriptural anti-Semitic hate-speech:

Pilate said to them, “What then shall I do with Jesus who is called Christ?” They all said to him, “Let Him be crucified!” Then the governor said, “Why, what evil has He done?” But they cried out all the more, saying, “Let Him be crucified!” When Pilate saw that he could not prevail at all, but rather that a tumult was rising, he took water and washed his hands before the multitude, saying, “I am innocent of the blood of this just Person. You see to it.” And all the people answered and said, “His blood be on us and on our children.” Then he released Barabbas to them; and when he had scourged Jesus, he delivered Him to be crucified. Matthew 27:22-26

So, by mixing in a heaping helping of man’s religion with Christianity as well as taking this verse entirely out of its context within the whole of the NT, the ignorant and the prejudiced have erroneously concluded the Jews, because they “killed Jesus,” are under some sort of special curse from God they had actually invited onto themselves and therefore are deserving of censure, rejection, and punishment. And those who hate Jews have used this sorry excuse for biblical interpretation to justify institutionalized murder and rape, wholesale dispossession, and outright genocide against them ever since. Steal, kill, and destroy — hmmmmm, who does that sound like? (John 10:10) Yet again, I digress…

If you take a close look at the entirety of the NT, you will discover the following:

Let me be perfectly clear here. God made a covenant with Abraham and through him as progenitor, to the entire Jewish people. Accordingly, it is called the Abrahamic Covenant by theologians. A covenant, as I explained in a previous article, is a legal agreement established between its founders and a covenant is binding upon not only them but also every one of their descendants in perpetuity.

A subsequent covenant based in the Law of Moses, known as the Mosaic Covenant, was introduced several hundred years later. That covenant ended with the death, burial, and resurrection of Jesus and the implementation of the new covenant in Jesus’ blood.

The New Covenant is just that: new! In Matthew’s account of the Last Supper, he records the words of Jesus:

Then He took the cup, and gave thanks, and gave it to them, saying, “Drink from it, all of you. For this is My blood of the new covenant, which is shed for many for the remission of sins. Matthew 26:27-28

The Greek word for “new” in this passage is kainos:

kainos
of a new kind, unprecedented, novel, uncommon, unheard of

This means those who choose to surrender to and serve Jesus are operating in a uniquely different relationship with God, a covenant relationship with no precedent and having never existed prior to Jesus’ sacrifice on the Cross. And so the Mosaic covenant was replaced by a new and better one: grace! The NT says it is better because it is based on better promises (Hebrews 8:6).

Here’s another tidbit: do you know what some of God’s covenant promises to Abraham were?

I will make you a great nation; I will bless you and make your name great; and you shall be a blessing. I will bless those who bless you, and I will curse him who curses you; and in you all the families of the earth shall be blessed. Genesis 12:2-3

So has any of this come to pass? Let’s take a look:

So let’s start with “a great nation” (elsewhere God promises that Abraham’s descendants will be as numerous as the sand on the seashore or the stars in the sky). Hmmmm… an interesting point of fact is there is hardly a corner of this planet where you cannot find a Jewish presence.

OK, how about being a blessing to all the families of the earth? Well, Jesus is directly descended from Abraham and salvation is certainly a blessing to everyone. Oh, and not to mention that the vast majority of all medical, scientific, and technological discoveries have been made by Jews.

So, did you catch that? God has honored His Word to Abraham and his descendants! And these aren’t the only things God promised that man.

But there’s one last promise in these verses: Those who bless (speak good words over) Abraham and his descendents will be blessed by God and those who criticize, attack, and attempt to destroy them are under a curse from the Almighty. That latter half, my friends, is not a place that any of us want to be in!

The Blood of Jesus

Wrapping up, let’s return to the blood of Jesus which established that new and better covenant. Every verse in the NT referring to the blood of Christ considers it to be a blessing. You see, it is by Jesus’ blood we receive forgiveness of all sin, it is by His blood we are brought near to God in an eternal covenant, it is by His precious blood we are sanctified — nowhere in Scripture does Jesus’ blood carry a curse!

So here’s my personal opinion and you are under no obligation to agree with me on the matter: in the same manner that the high priest prophesied it was expedient for one man to die for the nation (John 11:50-51), I believe the mob also prophesied over themselves, as well: “His blood be upon us and our children.” And though they did not at all intend it that way at the time, the blood of Jesus was and is available to every one of them and their descendants to wash away their sins, though regrettably and tragically few of them accept that precious gift.

And, finally, even if you successfully refuted everything that I’ve said thus far (a highly unlikely event, at best), here is the clincher: some of Jesus’ last words spoken from the cross

Father, forgive them, for they do not know what they do. Luke 23:34a

No curses, no dire imprecations, no judgment, only grace.

That is the Mashiach we serve!

For the record: both my wife and I are Messianic Jews. Some might contest that claim due to the fact that neither of us was raised as an ethnic or religious Jew. However, both of us have sufficient Jewish blood running in our veins that we would have been victims of the Holocaust had we lived in Germany during the Third Reich regardless of our stand for Christ.