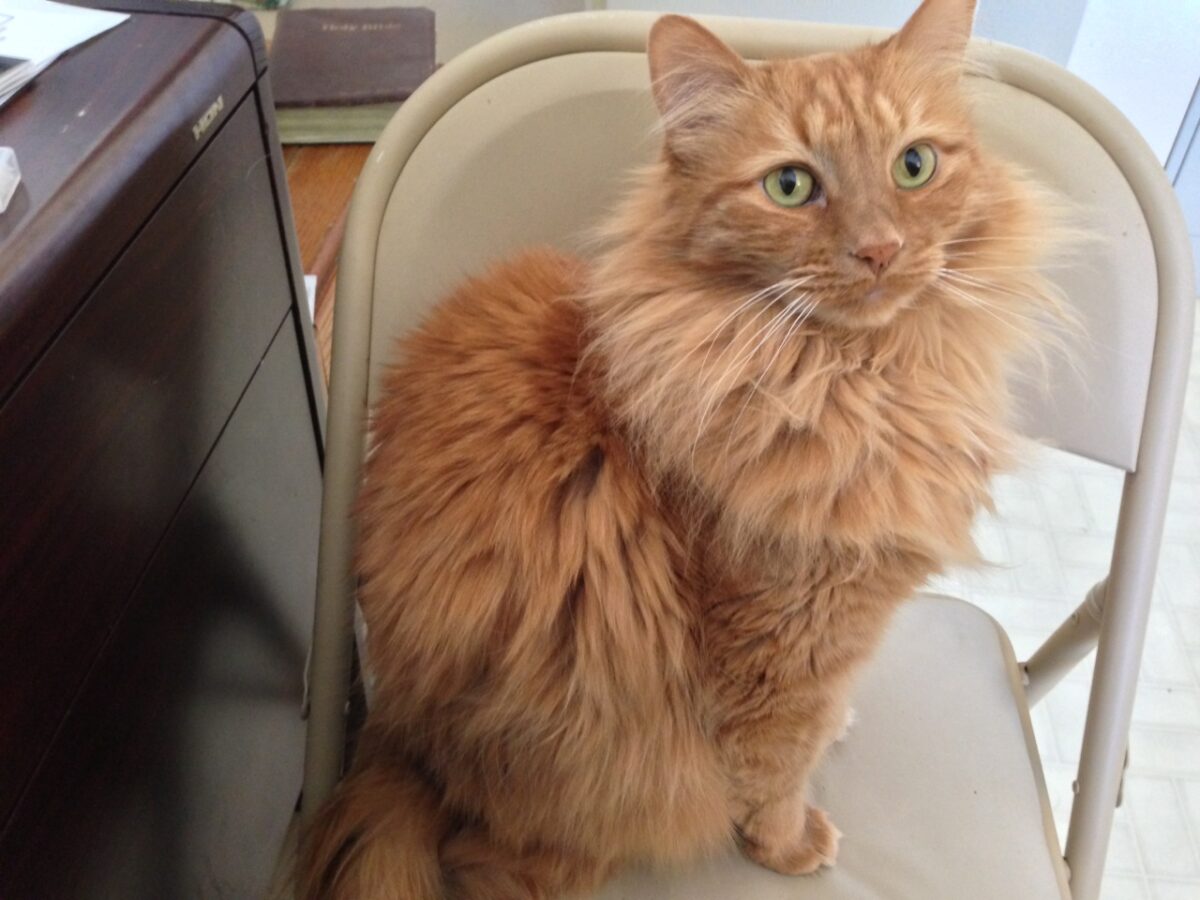 In a previous post, I discussed how our orange tabby cat named Tiger was used of God to teach me a lesson about worship. In this article, we’ll discuss the final lesson He used this precious animal to teach me.

Tiger had been chronically vomiting and lost quite a bit of weight for a period of months, so we thought he had contracted some sort of disease or condition which elderly cats are prone to develop. We needed to discover what was wrong, whether it could be treated, and, should treatment prove impossible or prohibitively expensive, to put him down. So we had the dubious privilege of hauling this little guy to the vet, an event we had never faced together since I took him and his brother to be neutered when they were wee kittens.

Tiger absolutely detested moving scenery and knew the cat carrier’s appearance meant precisely that. While it took me two tries to get him situated in there, fortunately neither of us was worse for wear afterwards.

However, once we arrived at the vet and I let him out of the carrier in the vain hope of holding and comforting him until the vet could see him, he got it in his fuzzy little brain that his life was in danger and he transformed from being a fairly docile kitty into a miniature version of his namesake and going full-beast-mode, first hiding under the examining room couch, hissing and growling while steadfastly refusing to come out (the feline equivalent of an extended middle finger), and then going into full-on attack mode when the tech tried to pick him up.

Making a temporary strategic retreat, the tech and vet returned. This time the tech wore a pair of elbow-length heavy leather gauntlets with steel-reinforced fingers.

We’ve all heard the term I used in the title of this chapter, but few — if any — of us have ever truly witnessed a person or animal doing precisely that. Tiger was doing everything in his earthly power to defend his fuzzy life in an all-out attempt to dismember/disembowel both the tech and the vet. He fought so desperately and valiantly, his gums were left bleeding and he left fang dents in the tech’s hands even through those massively heavy gloves. He clawed those gauntlets so hard, he ripped claws from his own feet, as well as injuring his right-rear leg —possibly a sprain or torn muscle/ligament.

Finally, they were able to restrain him enough to examine him and draw a blood sample. For you cat lovers out there, it turns out my true worshipper showed zero signs of any diseases or cancer. His blood work did indicate an abnormally high amount of allergenic activity, so we were faced with the challenge of determining what he was allergic to and how to mitigate that. Compounding that problem was he also had to also recover from damaging his leg to the point that he could not walk without excruciating pain. Within a day or two, he had recovered enough for me to administer his liquid medication using a syringe without any risk to my person, but he remained an extremely unhappy camper.

Unfortunately, that otherwise perfectly healthy cat physically, was so psychologically scarred (feline PTSD?) by his experience at the vet, that even though he was healthy enough to walk after a couple of days, he steadfastly refused to come out of whatever hidey-hole he could find, refusing to eat or drink unless it was right in front of him, and even then, hardly at all. He absolutely refused to use the litter box and simply peed/pooped in place, wherever that happened to be. Thank God we have tile floors on almost all of the ground floor and we were able to block off the carpeted upstairs with a borrowed toddler gate!

At one point, he snuck into our bedroom and hid underneath our king-size bed — we had to completely remove the mattress and foundations to get him out of there so he wouldn’t eliminate on the carpet, which traumatized him even further.

I faithfully medicated him with the steroids the vet had prescribed to deal with the allergies and, after a week of his PTSD behavior, added a tranquilizer the vet prescribed to the mix. The following week passed with zero improvement. His refusal to eat and drink emaciated him far beyond the shadow of his former physique prior to the initial vet visit. Before the initial weight loss started, he weighed a solid 16 pounds — he had shrunk down to half that by the time it was all over.

On what turned out to be his final night in our family, he surprised us both by coming out of hiding and jumping up onto my chest while I was watching TV on my recliner. Though his entire hindquarters were soaked in his own urine, I didn’t have the heart to push him away, so I pet him on the dry parts of his body until it was time for bed. I then gently placed him on the floor, stood up, washed my clothes, and showered. It felt like he knew the end was near and was telling me goodbye that night.

The next afternoon, I discussed with my wife what to do with the poor little guy and, after admitting to one another we had seen zero improvement, we reluctantly agreed it was time to pull the plug. I called the vet to schedule the euthanasia and cremation, accosted Tiger and doped him to the eyeballs with the tranquilizer/sedative to keep him calm, and transported him to the vet. He was so soaked in his own urine, I could not hold him in my arms, so I said my goodbyes to him through the grill of the cat carrier and let the tech take him to the back. That was the last I ever saw of him and I could barely keep it together emotionally while dealing with the receptionist to pay the bill.

Tiger was a great kitty, a faithful companion, and an awesome tool of God to teach me the true meaning of worship.

Looking back on my life, it never ceases to amaze me how I have fought God’s dealings with me. Even more amazing is how many people who call themselves Christians do the same thing and beyond. We are so afraid of the unknown, so terrified of change and what that might bring, so addicted to our comfort zones that whenever God starts moving us away from our utterly selfish ways towards Christ-likeness, we frequently resort to the kinds of emotionally and spiritually combative gymnastics Tiger exhibited at the vet’s office. Here’s a list, most of which I got from another minister, which I use as a handout in my counseling, support groups, and certain teaching situations:

All of these are go-to items for those fighting God tooth and nail, especially the first one: denial. Denial is the emotional and spiritual equivalent of sticking our fingers in our ears and shouting, “La, la, la, la, la!” This behavior is ultimately what killed Pharaoh in the Book of Exodus when he started remembering and re-believing a lie he had lived with his entire life: Darn it, I really am a god!

Denial is so pervasive that Step #1 of every 12-step program on the planet is for the addict to relinquish his/her denial by admitting they indeed have a problem and their life is out of control. Every time they attend a group meeting, before they can share what is going on in their lives, they announce their name and the phrase, “and I am a recovering alcoholic/addict,” again to keep denial at bay.

While all 10 behaviors I’ve listed are endemic in a humanity resisting the dealings of God in their lives, we tend to specialize in one or two of them in our refusal to surrender to the Most High. However, should we persist in any of them long and hard enough, they can prove deadly.

However, God is amazingly patient and gracious.

He is personally eternal and resides outside of space/time, so He can and does allow us to exhaust our stubborn and seemingly endless quest to maintain self-sovereignty over our lives until we “come to ourselves” as the Prodigal Son did aka “hitting rock bottom”. He will begin dealing with us in some area of our lives and, when we persist in choosing our own way instead of His, He will allow us to “take another lap around Mt. Sinai” as He did with the children of Israel in the wilderness. This cycle will continue until we finally surrender and obey. The penalties for our resistance increase with each and every lap as He keeps raising the stakes until we finally fold.

Poor Tiger fought so hard he physically injured himself, but in the end it was all an exercise in futility. The vet still examined him and drew a blood sample despite his titanic struggles. All Tiger accomplished was to cause himself an incredible amount of physical pain and emotional suffering, ultimately leading to his early demise, all of which could have been avoided had he simply submitted to the procedure peacefully.

We have the potential of fighting God so hard and for so long it costs us our life, not because God takes it from us — that would be theft and only the devil steals from us, kills us, and destroys our stuff (John 10:10) — but because we have so messed ourselves up during the fight we are killed by our own rebellion, whether by suicide or some other life-terminating situation.

I can’t help but wonder what the world — especially our nation — would look like if the Church got off its blessed assurance and fervently prayed, using our God-granted authority over the powers of darkness, to go full-beast-mode on the devil with the same level of all-out commitment Tiger demonstrated that day at the vet?

We have an incredible number of promises from God in His Word that we will prevail when we repent and pray, the chief among them being 2 Chronicles 7:14, 1 Timothy 2:1-4, and Hebrews 4:16.

And please don’t mistake me as being judgmental here; God is using this very lesson to challenge me to take my own prayer life to the next level!