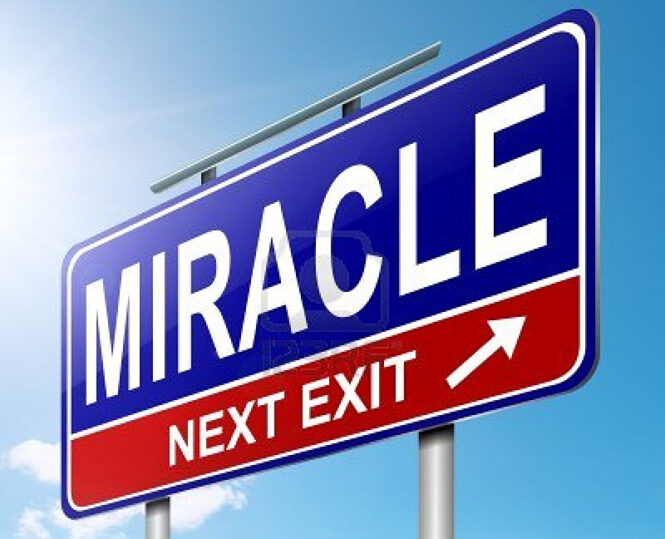 No true believer has problems with the Bible describing God’s miracles in the ancient past — we’re all in agreement the Word accurately portrays such events, so there is no controversy there at all.

It’s only when you start talking about God performing miracles in the modern day where you will generally have two kinds of reactions. Those who believe God still does them get really excited. Those who don’t get really freaked out. There is no middle ground — it’s a totally polarizing concept!

When you proclaimed Jesus as Lord of your life and believed in your heart God raised Him from the dead, God performed a comprehensive list of actions which are miraculous in nature and scope. That list includes:

A miracle is simply an event where God temporarily and momentarily suspends the natural laws of time and space in order to accomplish His will in the earth, usually in response to prayer. Since God created those laws by speaking them into existence in the first place, He is certainly neither bound by them nor prevented from accomplishing whatever He wills at any given point in time.

It is crucial to note that every miracle in the Bible and ever since started with a really big problem, one which could not be solved through human intellect/reasoning/effort, secular politics, or military action.

I find it fascinating to note the selfsame Calvinists who vehemently proclaim the absolute sovereignty of God (He can do anything He wants at any time for any reason regardless of what His Word promises) are almost always the same folks who will vehemently deny He can and does perform modern-day miracles. Despite the fact Jesus stated we as His followers would go on to perform greater miracles (in both quality and quantity) than He did, most Christians appear to content themselves with intellectually assenting to the fact such miracles happened once back in the day never to return in modern times. Just sayin’…

In my opinion, the refusal to accept the idea God still does miracles is a product of postmodern Western Civilization. Go anywhere in the Third World where you find Christian believers and the vast majority of them not only believe in miracles, but indeed experience them. That’s because they haven’t had the “benefit” of humanistic public school systems and traditional seminaries to talk them out of what the Bible clearly states.

As I’ve recounted elsewhere, the late missionary evangelist T. L. Osborn used to hold crusades throughout Africa, India, Asia, and elsewhere. He used to proclaim to crowds of people numbering in the tens and hundreds of thousands that God always confirms His Word with signs following. In other words, miracles. He went on to say that if miracles did not happen after he finished preaching, then whatever he said was false and he should not be believed.

Without fail, God showed up and miracles happened by the hundreds, even thousands. The crippled walked, the blind saw, the deaf heard, the dumb spoke, missing limbs were regrown, demoniacs were delivered and set free, all in the wonderful name of Jesus!

Obviously, I am firmly in the camp which believes God is still in the miracle business. I’ve experienced far too many of them to believe otherwise. That being said, I’m not here to ridicule you or put you down if you disagree, nor am I here to persuade you away from your viewpoint. What I do have to ask you is this:

What does the Word say?

I dare you study this topic out in your Bible without relying on the opinions of long-dead theologians and, simply allow the Bible to interpret itself using proper hermeneutical standards, and then draw your own conclusions as the Holy Spirit leads.

Whether you end up agreeing with me at the end of that study or not, your walk with God will be richer for the experience.

And it just might transform your prayer life into something you could never have previously imagined!