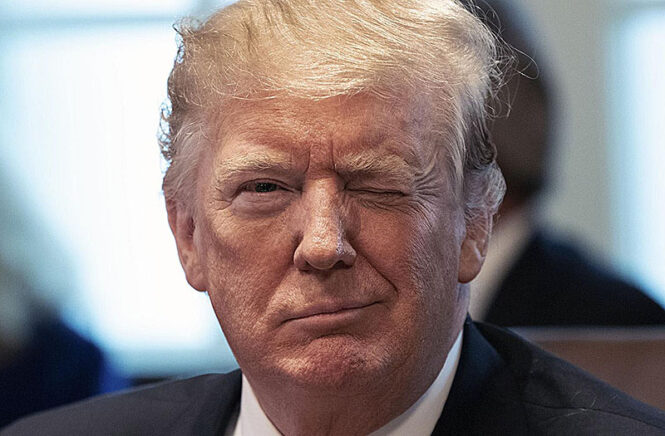 I would like to clarify my stance on the whole Trump-sex-talk debacle. I have posted several memes on Facebook pointing out the massive hypocrisy of the whole matter and to some, that may have looked like I’m defending Trump and what he said, compromising my Christian witness in the process. Let me make myself perfectly clear:

There is no combination of persons and circumstances which could ever make his words acceptable, excuse his words, or exonerate him for saying them, period, full stop.

His words were and are reprehensible, offensive, ungodly, and demeaning to women everywhere, period, full stop.

However, for folks to presumptively occupy an imaginary moral high ground from which they can pass judgment on the man over this matter is hypocritical beyond description. More on that later…

Recent interactions with evangelical leaders representing a wide doctrinal spectrum have given us legitimate hope that Trump, if not a recent convert to Christianity, is at the very least expressing a strong willingness to stand up for people of our faith.

On the other hand, Crooked Hillary has clearly stated that she wants to outlaw Christianity and force us to behave in ways that are clearly unscriptural and ungodly, not to mention that there is overwhelming evidence that she is utterly corrupt, a criminal who deserves prison. She is an openly devout disciple of a man, Saul Alinsky, who dedicated his seminal book on fomenting revolution to Satan and her publicly stated plans and intentions totally reflect that. She has also repeatedly covered for her rapist husband, trying to destroy his victims, to further her own political ambitions. Time after time she publicly says one thing, yet her private words and actions are diametrically opposed because she appears to be wholly given over to lying, even when the truth would serve her better.

So at worst, Trump is merely “friendly” towards Christianity. At best, he is a new believer who was led to Christ during the middle of a national election cycle after years of narcissistic and ungodly behavior, while facing a media who has openly declared for Crooked Hillary and has done everything in their power to shut the man down. If the latter, Trump faces an uphill spiritual battle none of us believers should envy and few could handle so well.

This recent revelation of an 11-year-old audio recording is the latest of such attacks, coming within an hour of the release of thousands more emails by WikiLeaks — emails that, had Trump not uttered those reprehensible words just over a decade ago, should have dominated the news cycle and torpedoed Crooked Hillary’s presidential campaign once and for all. They had this recording all along, yet the timing was deliberately designed to refocus the attention of the uninformed, the self-righteous, and the reactionary onto any topic other than the truth about Clinton’s crimes and nefarious schemes.

Most Americans — myself included! — have a fervent desire to see honest, godly men of stellar character lead our country, as exemplified by George Washington and other Founding Fathers. The truth of the matter is that most of the men who have led this nation have had serious moral flaws, especially in the sexual realm.

And this list just represents the low-hanging fruit. History is rife with other examples from both the Executive and Legislative Branches, and those accounts could fill whole books, if not an entire library!

Now back to hypocrisy: many non-Christian guys think and talk and brag like Trump did. Locker-room talk has been around from time immemorial. To single out Trump from the millions of guys on this planet with the same mindset is totally a double-standard. The widespread prevalence of rape and sex trafficking within non-Christian cultures (yes, I am including post-modern America in that list) proves my point without a doubt. 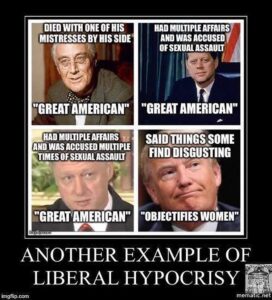 As for our government, most of Congress are also total hounds. Part of the many bribes they take from the special interests who manipulate legislation to their own ends are the services of whores, plain and simple. If you think the vast majority of Congress doesn’t act similarly to Anthony Weiner, the husband of Crooked Hillary’s closest advisor, Huma Abedin, you are sadly mistaken (besides not being the sharpest pencil in the cup, Weiner is just in too much bondage to his sex addiction to not get caught). For members of Congress to get all up in arms about Trump’s decade-old stupid locker-room comments, and un-endorsing him is simply political expediency — by Democrats and Republicans alike — because the vast majority of them talk and act with a similar crudity when out of the public eye.

Yes, it is indeed wrong, it is indeed evil, but that is our reality because that is who we as American citizens have voted into office. This kind of moral turpitude has not been limited to any one major political party — Republicans are just as guilty as Democrats in this regard.

11 years ago, Trump was without a doubt a non-Christian. He was living a hedonistic lifestyle commensurate with his incredible wealth and personal charisma, most likely without a single thought about Jesus or sin or church or anything else related to Christianity, I would imagine.

Did you actually expect something different? Really?

Judging a sinner for sinning is like condemning a dog for barking or a cat for meowing or an owl for hooting. Just like dogs bark, cats meow, and owls hoot, sinners sin; it’s in their DNA, it’s programmed into their psyche; all four act out their respective behaviors because that is their very nature and they cannot help themselves.

The truth of the matter is that you, me, and everyone else on the planet are no better.

We Christian believers were ALL reprehensible, ALL ungodly, and ALL acting contrary to divine edict. That is the essential doctrine called “The Depravity of Man” and precisely why we needed Jesus to do what He did. The only reason we are — hopefully — doing less and less of that over time is by the grace of God, the blood of Jesus, and His finished work of the Cross. To quote an old clichéd truism: “There, but for the grace of God, go I!” 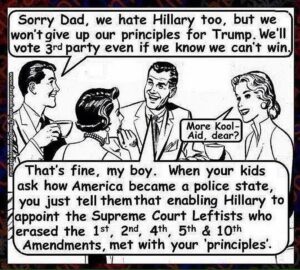 We have NO moral high ground from which to judge Trump for his words — or even Crooked Hillary for her crimes, for that matter. We are not equipped by calling, ability, or personal holiness to exercise such judgment. That moral high ground and the judgment seat resting upon it has been personally staked out, occupied by, and reserved to The Most High God and Him alone. He zealously and jealously guards that privilege against all comers, with dire consequences promised to those who would arrogantly try to usurp it.

The truth of the matter is that, unless Jesus Himself is on the ballot, we are ALWAYS choosing between the lesser of two evils — ALWAYS!

Not to mention Vladimir Putin, Iran, ISIS, China, North Korea, and a host of other evildoers, evildoers who are collectively held in check only by the industrial and military might of the USA.

So Trump still has my vote — and my prayers. If you’re smart, he’ll have yours, too.

I may indeed be totally wrong about Trump. But are those of you who have the opposite opinion willing to admit the same?