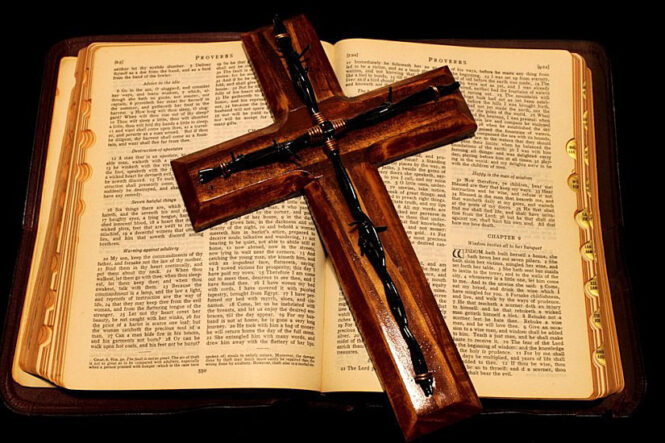 Today, an article entitled “Christian, You Are Upset About The Wrong Things” was brought to my attention on Facebook by a fellow minister and he requested my evaluation. I started to reply in Facebook, but my answer quickly became too lengthy for that venue, so I’ve written my response in this article.

A favored tactic of propagandists from time immemorial is to over-simplify complex issues, reducing them to either/or choices, saying if you believe “this,” and not “that,” you are wrong because “that” is the only correct view of the matter. In philosopher-speak, this is a logical fallacy called “false dichotomy.”

There is another technique/fallacy called “attacking the straw man” where an imaginary exemplar of some demographic group of people is created in the imagination of the author and then attacked as morally, ethically, and/or theologically inferior/incorrect/reprehensible.

This author’s article reeks of both!

“30,000 kids starving every night and Christians don’t give a s–t” is the opening premise. If I note his foul language and take offense, rather than taking offense at the plight of the poor, I’m wrong? What utter rubbish! Is it entirely possible I care BOTH about the suffering of innocent children AND about the speaker’s use of profanity? In the mind of such an author, that is simply not an option.

In his first “if,” the author categorically states those Christians opposed to gay marriage and the LGBTQ agenda and are not upset about how that demographic is being persecuted are focussed on the wrong thing.

The correct Christian position is to oppose the institutionalization and normalization of an inherently immoral lifestyle within society while remaining selflessly loving towards those entrapped within it (Jesus never said our lives would be easy! 🙂 ).

In the United States, the same Bill of Rights protecting our freedoms as believers to assemble and worship without government interference or regulation also protects homosexuals from persecution by those who abhor their behavior — including us! Whenever we see any demographic of our population being attacked and marginalized, we should be operating in love towards those so victimized while remaining true to scriptural dictates concerning their lifestyles and beliefs. even when we are disgusted by them. I’ve delved into the issue of homosexuality in depth in another article here on Miscellaneous Ramblings, if you want to read further.

The rest of the article is a litany of progressive hot-button issues: gun control, welfare, environmentalism ad infinitum, ad nauseam.

The sole point I do agree with in his article is we, as Christ-followers, have no business judging non-believers as “less than.” That kind of religiosity and self-righteousness is precisely what Jesus consistently attacked in the Pharisees of His day. I’ve written on this topic in depth elsewhere here on Miscellaneous Ramblings, but I will recap the broad strokes again here: Sinners sin because they are sinners, period, full stop! They cannot help themselves from sinning any more than a dog can stop barking, growling, and peeing on fire hydrants or a cat can stop meowing, purring, and vomiting hairballs on the rug.

It was for this selfsame reason that Jesus, God-in-Sandals, had to show up on this planet to die for our sins, because no matter how hard we try, no matter how much right living we may appear to achieve, we remain hopelessly corrupt and totally incapable of doing anything other than being totally self-centered. Us judging the lost is a classic case of “being born on 3rd base and claiming we hit a triple.” The only reason we believers can and do live lives other than in helpless, mindless obedience to our eternal and insatiable self-lordship is by submitting the Lordship of Jesus by faith and being “born from above,” the indwelling of the Holy Spirit inherent to that experience, and the written Word of God put to practice in our daily lives.

The cited article is yet another liberal screed telling Bible-believing Christians what they should do and think, regardless of what the Bible says. IOW, according to him, if we claim to be Christians and do not agree with the author’s liberal ideology, we are bad Christians.

4 thoughts on “The Fundamentalists Strike Back”