Just about every Christian theologian can agree that the following verse in the Book of Hebrews defines the concept of “faith:”

As with almost all of my Scripture quotes, this one is from the New King James Version. Unfortunately, this and many other translations fail to do it justice in conveying the total meaning of the verse. Here is the same verse in the Amplified Version, which does a far better job of translation from the Greek:

Now faith is the assurance (the confirmation, the title deed) of the things [we] hope for, being the proof of things [we] do not see and the conviction of their reality [faith perceiving as real fact what is not revealed to the senses].Hebrews 11:1 AMP

Every promise of God is received by this process, so it is crucial that we understand how faith works. I’ve already discussed how to develop your faith in God and His Word in my fourth article on Healing. Now I want to delve into this concept more deeply and explain both how it works and how it relates to prayer.

Here are a couple of definitions from the original Greek:

substance (hupostasis)
that which has foundation, is firm; that which has actual existence; a substance, real being; the substantial quality, nature, of a person or thing; the steadfastness of mind, firmness, courage, resolution; confidence, firm trust, assurance.
evidence( elegchos)
a proof; that by which a thing is proved or tested

Hupostasis means the things we are believing for have a tangible (clear, definite, real) existence in the spirit realm (eternity) before they appear on Planet Earth. Elegchos, on the other hand, is what is presented in court to prove to a judge and jury that thus-and-so happened on such-and-such a date by the hand of whosoever.

Thus, faith presents us with clear, definite, real proof of what we are believing for.

Faith’s Foundation is Submission to Jesus’ Lordship & His Word

Faith is a total dependency upon — and abandonment of control to — the Godhead and His Word to the exclusion of all others, including ourselves. Faith is not a “leap” into the great unknown, but a measured step based upon specific revelation from God’s Word as revealed by the Holy Spirit. Making a “leap of faith” is a totally unscriptural concept.

Our Heavenly FatherGod does not respond to human need, only to faith in and submission to Him personally. This is a fundamental truism concerning the One True God.

There are billions of folks in dire need throughout the world, the vast majority of whom are not submitted to Jesus Christ as Lord of their lives because they are devoted to false religions, such as Roman Catholicism, Islam, Buddhism, and Hinduism, just to name the top 4. God will not answer their prayers to the other so-called deities involved (the Virgin Mary, Allah, Buddha, or Krishna, etc.) because that would be establishing them in wrong-doing (specifically, idolatry), something He never does. If anyone actually receives answers to prayers made to these false gods, that is Satan answering to reinforce and perpetuate the lies they already believe.

Authority & Responsibility Must Aways Be Equal

God does not allow Himself to be held responsible for anything He is not in charge of. So if we are not doing things according to His Word in the manner and with the attitudes expected of us, God is not bound to honor our prayers.

Because we are in rebellion against His authority.

Here is another fundamental truism: a true test of submission only occurs when there is a difference of opinion. Anyone can submit when he/she agrees with the boss — submission is a proven fact whenever the person disagreeing with the boss does what the boss wants anyway — with a good attitude and heart. So true submission to God is evidenced in our lives whenever we want to do one thing, God wants us to do another, and God wins!

And lest anyone think I am espousing the false doctrine that God’s willingness to answer our prayers is based upon our own performance, please be disabused of that notion right this second! This is not about our attempts to achieve perfection by our own dead religious works, but about an attitude and lifestyle of submission to the revealed will of God for our lives.

Faith is allowing God to control a situation so that His results will prevail.

We don’t like this idea very well because our sin-desiring flesh cherishes “The Lie” perpetrated by Satan in Eden — “You can be your own lord and it will work!” — and the idea of abandoning control to an invisible, though loving, Being Who demands our allegiance runs directly contrary to that lie.

This is also how the Book of James can say “faith without works is dead.” As we trust God, we also obey Him out of that faith. As God shows Himself faithful by blessing our obedience, we learn to trust Him even more. Think in terms of a “victorious cycle” as opposed to a vicious one! 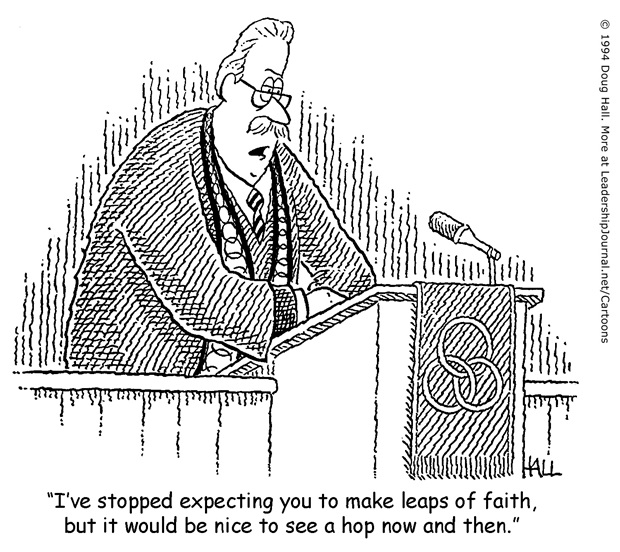 That’s why a “leap of faith” is contrary to the Word. Some challenges are simply too big a bite for us to chew off all at once, so we take steps of trust and obedience, which builds our faith and willingness to take the next step of faith, because God is building a track record of His faithfulness within our consciousness. That’s why there are so many Scriptures talking about recounting the good works of God, bringing them to remembrance in praise and thanksgiving because it reinforces our faith for the next step. 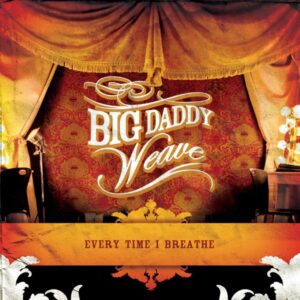 One of my favorite old hymns captures this concept perfectly. It is entitled Trust & Obey and here it is as recorded on the album Every Time I Breathe by one of my favorite bands, Big Daddy Weave, followed by the lyrics so you can read/sing along:


Verse 1
When we walk with the Lord
In the light of His Word,
What a glory He sheds on our way!
While we do His good will,
He abides with us still
And with all who will trust and obey.

Verse 2
But we never can prove
The delights of His love
Until all on the altar we lay.
For the favor He shows,
For the joy He bestows
Are for them who will trust and obey!

Verse 3
And in fellowship sweet,
We will sit at His feet
Or walk by His side in the way.
What He says, we will do.
Where He sends, we will go.
Never fear, only trust and obey!

Faith is NOT a Commodity

Some have taught faith is some sort of “thing” that can be obtained or lost.


Faith is in fact 100% relational and entirely rooted in our personal relationship with the Godhead:

Christianity is about relationship, not religion. The Bible is not an end unto itself, but was written to lead us into an intimate personal relationship with its Author.

Anyone who teaches otherwise has missed the point completely!

Our faith is in a Person, not a book. The Book reveals Who that Person is, how He operates, what He has said and done, and what He has promised, both to those who follow Him and those who don’t.

So while our faith can grow through a greater revelation of Who God is and what He has promised, it cannot diminish unless we choose to walk away from Him through apathy, unbelief, or rebellion.

Faith is a God-given Gift

For by grace you have been saved through faith, and that not of yourselves; it is the gift of God, not of works, lest anyone should boast. For we are His workmanship, created in Christ Jesus for good works, which God prepared beforehand that we should walk in them. Ephesians 2:8-9

In this passage, God telling us we have been saved by faith and that faith is not the result of our own efforts, desires, or accomplishments — it’s a gift! The corollary of that truth is we have no basis for drawing attention to ourselves for our “great faith” or any other aspect of our relationship with the Most High God. He initiated the whole thing through the Person of His Son Jesus Christ in His life, death, burial, and resurrection. Even our ability to receive His incredible gift of salvation is solely by His grace opening up revelation of these things to us so we could respond to them.

For I say, through the grace given to me, to everyone who is among you, not to think of himself more highly than he ought to think, but to think soberly, as God has dealt to each one a measure of faith.Romans 12:3

So why does this make any never mind? The answer is simple: because we have this sin-based, flesh-ingrained impulse to view God through the lenses of our own selfishness where partiality rules. We all have favorite people and we are tend to be willing to do nice things for them as opposed to those we don’t like, so we erroneously presume that God operates on the same basis.

As I covered in much greater depth in my article about the character and attributes of God, God is totally impartial. He loves all of us equally and we can extrapolate this concept to faith and prayer, as well.

We have an analogy between our human bodies and spiritual selves. When we are physically born, barring birth defects, we start out with all the same body parts: 1 brain, 2 lungs, 1 heart, 1 stomach, 206 bones, etc. As we mature, no new body parts are added — they are all there, just under-developed, an issue that is resolved as we mature into adults.

In the same manner, we are born-again with all the spiritual “body parts” we will ever receive — faith included!

Our job is to feed on the Word, opposing the negative circumstances and trials that come our way by faith in that Word, thus allowing our Heavenly Daddy to nurture and raise us into maturity. Just like some people have developed their muscles more than others through training and discipline, so too are there Christians who have developed their “faith muscles” to a greater extent than other believers, also through training and discipline.

But we all have the same faith potential given by the same impartial God and no one has any inherent advantage over their brothers and sisters in Christ.

We’ll continue delving into the concept of faith in my next article.