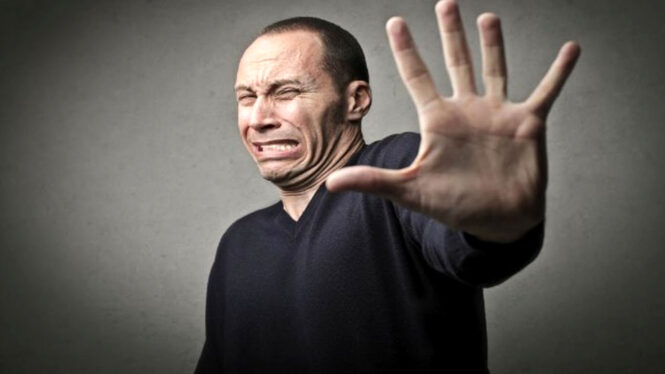 What I’m about to describe is pretty gross, even disturbing.

Frankly, I was so totally repulsed by it, I had to think long and hard about whether to write about it. But the Holy Spirit has been tugging at my heart concerning this experience to convey some crucial spiritual truths, so please bear with me!

While our house is fairly large, relatively new, and quite nice in many ways, it is a tract house built by a slap-em-up and move-on-quickly developer, sometimes using subcontractors of questionable skills and work ethic. Accordingly, almost all of our plumbing fixtures are contractor grade. That means our faucets, toilets, etc. are the lowest quality available bought at the lowest possible price.

Our master-bathroom toilet has been the bane of my existence ever since we moved in a few years ago. I’m constantly having to plunge the darn thing because it seems to panic and stop up at the mere thought of a seated user. Because of the weird way this cheap toilet is constructed, it requires a special plunger to unstop it — it simply laughs at standard plungers.

The other day, I had just finished unstopping our toilet-from-hell for the umpteenth time in recent memory. Immediately afterwards and to my utter amazement, this roughly four-inch wet glob fell out of the plunger onto the bathroom floor.

I was gob smacked! 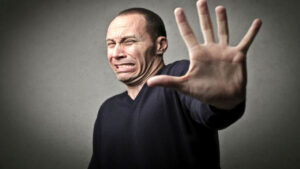 I have never once in my almost 70 years on this planet witnessed such a revolting object — nothing else comes even remotely close!

Because of where it came from, I immediately knew how amazingly toxic it would be. I wasn’t about to pick it up by hand, even using paper towels. I played it safe and employed a pair of long-handled tongs. Since I have no biological warfare lab at my disposal, I had no way to analyze it. My scientific wild guess is that it was a mega-colony of black mold which had grown undetected in that plunger for months, perhaps years.

So why has the Lord asked me to inflict this noisome image upon your consciousness?

He showed me it was a picture of sin the way He sees it.

I now have a visual analog of why Jesus had to come and die for us.

We’re All in the Same Sinking Boat

No matter how loving, kind, generous, altruistic, or otherwise selfless we humans may be on the outside, the core of our flesh looks far, far worse than that pernicious blob of whatever I just described. No matter how hard we try, how long we try, how consistently we try, our “blobs” are simply inescapable.

Therefore, to him who knows to do good and does not do it, to him it is sin.James 4:17

For all have sinned and fall short of the glory of God Romans 3:23

For the lost, this is an irrevocable, inescapable death sentence with no hope of appeal, no possibility of commutation.

The soul who sins shall die.Ezekiel 18:4b
For the wages of sin is death Romans 6:23a

We’ve all been hit with this “ugly stick” and no one is exempt. The $10 theological term for this is “The Depravity of Man,” one of the essential doctrines of Christianity.

In summary, we suck! 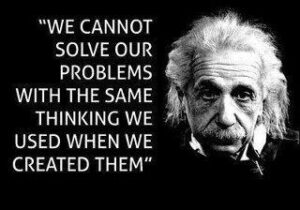 Because we hate feeling so badly about ourselves, we have preferred ways of constantly sweeping our varying degrees of failings under the rug of our consciousness. We:

This sad state of affairs has remained unchanged since The Rebellion in Eden. We keep vainly attempting to cover things up by applying various shades of “lipstick” to our particular “pigs.” The only folks who can’t see through our flimsy disguises are those who don’t know us well — or are even more emotionally damaged than we are.

On top of that, we also instinctively gravitate towards humanity’s fallback position (also since The Rebellion): man’s religion and the dead religious works it demands. There are no exceptions to be found here, either. Even self-proclaimed atheists are some of the most religious folks you will ever find. Their religion’s tenets are to hate the God they loudly and vehemently proclaim doesn’t exist, then make everyone in ear-shot miserable listening to their schtick. Think spiritual vegans. But I digress…

All this precludes us from “pulling ourselves up by our bootstraps” spiritually to stand blameless before our transcendent, maximally great, omni-benevolent Creator. “Omni-benevolence” is a $10 theological term meaning He is perfectly good, possessing no evil characteristics whatsoever. This single characteristic most separates Him from us humans.

Mankind only experiences “good” because of God’s common grace. Theologians call it “common” because He grants it to every human being on the planet. Another aspect of common grace is He doesn’t wipe all us rebels off the face of the earth en masse. There are yet others — our experiencing any flavor of “good” is one of them.

All of us have a subconscious racial memory of Eden’s perfection. We call that memory “normal,” then use it as a yardstick to evaluate ourselves, other people, and our world — which are collectively anything but. Then we pour tremendous energy into jumping through incredible mental, emotional, and spiritual hoops, trying to regain “normal” in our families, workplaces, politics, social relationships, and spirituality.

While some of us have achieved lives of relative health, peace and prosperity, the perfection of “normal” proves perpetually elusive. Our three opponents, the world system (cosmos), our flesh, and our psychopathic enemy, Satan, constantly wreak havoc on ourselves and our relationships. No matter how hard, long, and diligently we try to do better, they all conspire to kick our collective heinies with depressing regularity.

Left to our own devices, our situation is well and truly hopeless.

Our Heavenly Father has compassion on us, seeing our hopeless plight. In His loving grace and mercy, He gave us a way out of the just sentence we’ve earned through our selfish choices.

His name is Jesus.

Before I continue, let’s clarify what I just wrote by defining some of its terms: 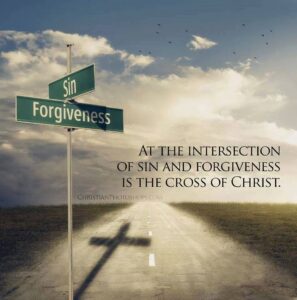 just (dikaios)
rendering to each his due in a judicial sense, passing righteous judgment on others, whether expressed in words or shown by the manner of dealing with them
compassion (splagchnizomai)
sympathetic pity and concern for the sufferings or misfortunes of others
love (agape)
to unselfishly choose the highest good for another
grace (charis)
to give something undeserved for free
mercy (eleeo)
compassion or forgiveness shown toward someone who it is within one’s power to punish

The Paradox of “Free”

Biblical Christianity is filled with paradoxes. Seemingly contradictory concepts like “the first shall be last, the last first” and “he who desires leadership must be servant (slave) of all” (Mark 9:35) are salted throughout Jesus’ teachings. Embracing them is inescapable as we allow the Holy Spirit to assimilate His Word into our thought patterns and behavior.

At the forefront of all such paradoxes is “salvation is a free gift, yet it costs us everything.”

This is literally the Gospel Truth.

That being said, we must indeed pay a significant cost, one which cannot be quantified monetarily or morally.

…if you confess with your mouth the Lord Jesus and believe in your heart that God has raised Him from the dead, you will be saved.Romans 10:9-10

The word “Lord” has a particular significance escaping many these days. Here’s what it means:

lord (kurios)
someone having power, authority, or influence; a master or ruler to whom a person or thing belongs, about which he has power of deciding

Intellectually assenting to Jesus’ resurrection from the dead is not nearly enough; He must be the Absolute Ruler over our lives. When we confess Him as Lord and are water baptized, we are publicly declaring before Him, His angels, mankind, and the powers of darkness He is our Boss, our Head Honcho, the Driver of our car, the Pilot of our plane, the Captain of our ship.

He owns us body, soul, and spirit.

This solitary requirement is immutable, unwavering, and without deviation. He makes no exceptions for our: 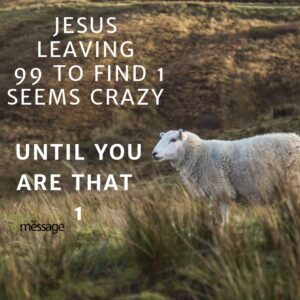 It’s all or nothing.

Why is this such a sticking point?

Our compassionate and loving Heavenly Father loves us way too much to grant us that precious gift on our own terms.

As I’ve already described above, we are all creatures of havoc. Left to our own devices, we would simply accept His gift and run off with it. We would keep right on damaging ourselves and others in our own particular idiom. We would relegate Him to being our Cosmic Bellhop, demanding of Him whatever our screwed-up little hearts desired.

Tragically, that is what many attempt, even within the Church. Time and again, we try to wrest the steering wheel of our lives from His capable hands. As we repeatedly fail, as we inevitably do, we then blame our wretched results on Him, shaking our fists in His face and demanding, “WHY!!!???” when our answer to that pivotal question is most often staring back at us from any nearby mirror.

We have been in open revolt against God since The Rebellion. At the same time, we’ve been trying to achieve peace with Him ever since. The sticking point in the negotiations is He refuses to accept our terms for His surrender. 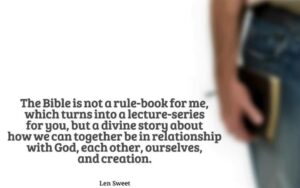 Were you able to see my face in the spirit realm, you would find a forehead heavily scarred from multiple collisions between it and the Rock of Ages. Many of them were painful beyond description. So I have no moral high ground from which to pass judgment on you or anyone else trapped in the throes of self-lordship.

But I can say with complete certainty, “Been there, done that, got T-shirts and nicknacks. It sucks and you will lose!”

What I am showing you is the way out.

It’s called “humility” before Him coupled with a single-minded, no-holds-barred devotion to the Person of Jesus Christ. I’ve explored those topics in my articles entitled Humility, Humility Revisited, and Double-Minded, so I will not reinvent those wheels here; read them at your leisure.

Ultimately, the choice is yours.