One could easily assume that after almost 50 years of being a Christ-follower — and having earned advanced degrees in theology to boot! — I would have had more than a few opportunities to interact with dyed-in-the-wool atheists. The truth of the matter is I have had only one such encounter that I can remember; it occurred back in January 2020.

The following is my account of that event.
END_OF_DOCUMENT_TOKEN_TO_BE_REPLACED

What is Secular Humanism? 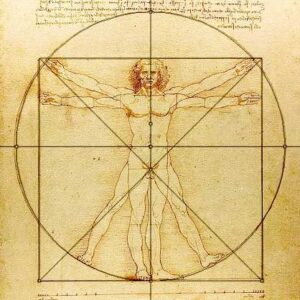 Point of fact: secular humanism is a religion in its own right.

I was, too, when I stumbled across an article mentioning how the United States Supreme Court had declared it as such in the 1961 case of Torcaso v. Watkins (367 U.S. 488).

“Man is the measure of himself” as expressed visually in Da Vinci’s Vitruvian Man is their creed and motto (see the entire Star Trek franchise for a vivid portrayal of this philosophy in action within in a fantasy world having no basis in reality).

So what are the tenets of this religion?
END_OF_DOCUMENT_TOKEN_TO_BE_REPLACED

As I described in my very first post, there is a philosophy I call “man’s religion”, not in the sense of gender, but of mankind. And I covered there many of the major distinctions between man’s religion and true, biblical Christianity in that post.
One of the misconceptions about God inherent to man’s religion is that He is silent. People think He’s just “out there” somewhere in the cosmos, watching from the balconies of heaven, smiting some, blessing others, but definitely not interested in talking to us. The totally-ungodly and unscriptural Bette Midler song, From A Distance captures this mindset perfectly.
Nothing could be further from the truth!

In fact, we see throughout most of the OT books written by prophets (Isaiah, Jeremiah, Ezekiel, et al) God actually mocking and ridiculing the “dumb idols” that frequent man’s religion as well as mocking those who worship them. While we modern folk tend to regard people who worship carved or cast images as ignorant primitives out in some jungle, there is a tremendous amount of idol worship going on throughout the world, even right here in America,  probably even in your own neighborhood.
What? You don’t believe me? 🙂 Well let me give you some wonderful examples:
END_OF_DOCUMENT_TOKEN_TO_BE_REPLACED